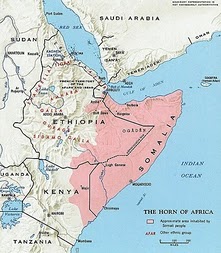 After 20 years as a failed state, Somalia has become a playground for foreign occupiers of every stripe. Its crumbling streets and gutted buildings have attracted a host of powerful armies and agents from around the world, each with its own agenda and its own vested interests.This war-torn land, like the similarly crippled nation of Afghanistan, is too impoverished and too feeble to resist the interference from abroad. And now its deadly famine is luring another wave of outsiders – mostly well-intentioned, but each contributing implicitly to Somalia’s loss of independence.
Some of the foreign players are highly visible. Ordinary Somalis are forced to step aside to make room for those who are barrelling down the streets of Mogadishu: a heavily armed convoy that bears the flag of a European relief agency, or an armoured vehicle filled with Ugandan troops and painted with the initials of the African Union.


Others are lurking covertly in the background: U.S. intelligence operatives; Ethiopian secret agents; and Islamist militants who were trained in Pakistan or Afghanistan.

Critics of foreign aid sometimes suggest that African countries should be left alone to settle their own problems, but for Somalia it is too late. The country has been subjected to foreign interference for two decades, and its own people have little say in the matter.

Here are some of the key actors in Somalia today:

Washington is heavily involved in Somalia, despite its refusal to keep troops in the area after its severe losses in the disastrous Black Hawk Down battle of 1993. One of its levers is financial: it has spent more than $300-million since 2007 to prop up the official government, providing money for the Somali army and subsidizing the African Union peacekeepers in Mogadishu.

But its influence is more than monetary. It sends in shipments of weapons for the government forces. It provides training and dozens of “advisers” to the peacekeepers and the Somali army. It has sent its Special Forces operatives on helicopters into Somali air space to assassinate suspected members of terrorist organizations. It sends armed drones on surveillance missions over Somalia to hunt for militants. And its private security firms have been active as U.S. government contractors in Somalia, recruiting French and South African war veterans as “mentors” to the African peacekeepers.

An investigation this summer by a U.S. magazine, The Nation, reported that the U.S. Central Intelligence Agency has a heavy presence in Mogadishu, including a sprawling compound at Mogadishu airport, where it hires Somali soldiers and intelligence agents for “counter-terrorism” duties. The report said the CIA uses a secret prison in Mogadishu to interrogate prisoners, some of whom are captured in neighbouring Kenya and flown secretly to Mogadishu.

Thousands of Ethiopian troops, backed by the United States, invaded Somalia in 2006 to drive out an Islamist government in Mogadishu. They remained in Somalia until 2009, propping up the weak central government. But even after their formal withdrawal, the Ethiopians have remained big players in Somalia. They have supported and trained the government army, and they have continued to make occasional incursions into Somali territory.

“If you want to be president or prime minister, you make your trip to Addis Ababa to be anointed,” he says. “Ethiopia still has an embassy in Mogadishu, they have 250 military still in Mogadishu, and they have an intelligence network that still operates throughout the whole of Somalia. The U.S. Defence Department and the CIA still depend completely on the Ethiopian intelligence network.”

There is strong evidence of foreign support for the Islamist militants known as al-Shabab, who control most of southern and central Somalia. Al-Qaeda has become an ideological ally of al-Shabab, and foreign fighters have arrived in Somalia from al-Qaeda training camps in the Middle East, Afghanistan and Pakistan. Those foreign insurgents have also imported foreign tactics to Somalia: suicide attacks, roadside bombs and trench warfare. African Union peacekeepers say the insurgency by al-Shabab is fuelled by shipments of weapons from the Middle East into Somalia. And there were strong hints of its links to foreign terrorist organizations in July 2010 when al-Shabab launched a massive bombing attack in Uganda, killing more than 70 people.

Eritrea, which has fought a series of brutal wars against Ethiopia since the 1960s, has been another foreign supporter of al-Shabab and other Islamist militias in Somalia. Investigations by the United Nations have found that Eritrea provided weapons, money, transport and training for the Islamist fighters. Its support for the Islamists is partly aimed at counter-balancing Ethiopia’s influence in Somalia. The result was a proxy war between the two rivals on Somali territory.

UGANDA AND BURUNDI
These two East African nations are providing almost all of the 9,000 troops in the African Union peacekeeping force in Somalia. In heavy fighting across Mogadishu this year, they pushed back the fighters of al-Shabab and succeeded in removing them from most of the city. Uganda, a major regional power, has also become a key broker in Somalia’s political scene, putting pressure on politicians to settle disputes within the Somali government. But its military role is its greatest influence. As the leading power in the peacekeeping force, Uganda has been crucial in ensuring the safety of the fragile Somali government and protecting it from al-Shabab.  Via  The Globe and Mail
Posted by Unknown at 11:05 AM