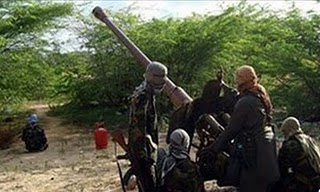 Heavy fighting in Somali border town.
Mogadishu - Heavy fighting broke out on Friday close to Somalia's border with Kenya as extremist Shabaab fighters launched a dawn attack on the town of Dhobley but were later repelled, fighters on both sides said."The fighting was very heavy but we emerged victorious, there are casualties on both sides," a senior commander of the Azania militia group controlling the area told AFP by phone from the battleground.
Dhobley is under control of forces from the self-declared state of Azania, an anti-Shabaab militia reportedly backed by Kenya to create a buffer zone along the troubled frontier."We have fully regained Dhobley after a fight, the Shabaab were pushed out of the area," the Azanian commander added, declining to be named.Civilian casualties are reported to be high with fighting inside the town itself.However, a senior Shabaab commander said his fighters had made a tactical withdrawal a short distance outside the town after intense fighting."The enemy suffered heavy casualties as planned, and we will return back again when it is good for us," said Sheikh Mohamed, claiming that Shabaab fighters had also seized large stores of weapons from the town.
Dhobley is just 5km from the Kenyan border, and is a key crossing point for people fleeing to the giant Dadaab refugee camps, some 100km into eastern Kenya.Dadaab, the largest refugee complex in the world houses some 450 000 people, with 140 000 Somalis fleeing drought, famine or violence arriving this year alone, according to the UN refugee agency.Civilians and fighters were reported to have crossed the border towards the Kenyan town of Liboi, while Kenyan tanks and helicopters were reported in the area.- AFP Via new24
Posted by Unknown at 11:44 AM