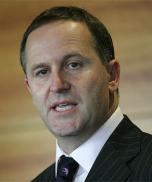 Three international terrorist groups have been officially recognised by the government.Prime Minister John Key said Jundallah in Iran, the Revolutionary People’s Army/Party in Turkey, and the Shining Path in Peru have been designated under the Terrorism Suppression Act 2002.“All three entities have committed various terrorist acts, including the killing of civilians,” Mr Key said.
“As a result of the designations, any assets held by the groups and found in New Zealand either now, or in the future, will be frozen. It will also be a criminal offence to deal with their property or make property or financial services available to them.”
The designations were not a response to domestic terrorist threats in New Zealand, nor were they influenced by New Zealand’s relationship with other countries, Mr Key said.
Under UN Security Council Resolution 1267 New Zealand has designated nearly 500 terrorist groups and individuals listed by the United Nations, and the latest three groups designated brings the number of terrorist entities not listed by the United Nations to 17.