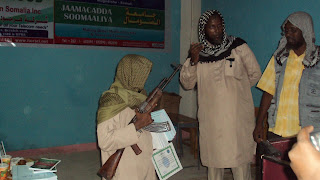 terrorist Sheikh Mukhtar Robow  presenting the awards   terrorist websites/forums are still up  Pics from Somali Al Qaeda  jihad  Website..when we are giong to shut down ?
MOGADISHU, Somalia—An Islamist insurgent-run radio station in Somalia says it is awarding guns, bombs and books to three children in a Quran recital contest

An Islamist-backed radio station in Somalia has awarded assault rifles and hand grenades to the winners of a children's Qur'an recital competition.
Andalus radio, which is run by al-Shabaab militia, said on Monday that the first prize was an AK-47 and £450. The runner-up received an AK-47 and £320, while the child who came third received two F1 hand grenades and £250. The three children also received religious books.Pictures of the senior Islamist leader and spokesman Sheikh Mukhtar Robow presenting the awards in Elasha Biyaha, about 11 miles from Mogadishu, were posted on an rebel-affiliated website.Al-Shabaab controls much of southern Somalia and is trying to overthrow the transitional government in Mogadishu. Designated a terrorist organisation by several western governments, the group has links to al-Qaida and practises an extreme version of Islam.In certain areas al-Shabaab leaders have banned musical ringtones, films, football broadcasts, dancing at weddings and even shop signs written in English or Somali, rather than Arabic. Punishments include double amputations and stonings. The rebels have also systematically recruited children under 15 to fight for them, according to Amnesty International.The Qur'an recital contest has been running for three years and takes place after Ramadan. The two previous award ceremonies have occurred in Kismayo, an al-Shabaab stronghold on the far southern coast. In 2009, prizes included hand grenades, anti-tank mines and an AK-47. The winners of that contest were between 17 and 20 years old.The age of the winners of this year's competition, who represented the towns of Elasha Biyaha, Kismayo and Mogadishu, are not known.Radio Andalus takes it name from Andalusia in southern Spain, which was part of the Islamic empire at various times between the eighth and 15th centuries.via  Guardian
Posted by Unknown at 9:29 AM