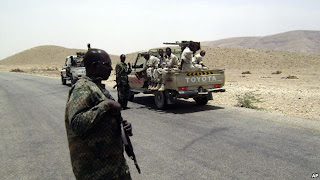 Somalia’s al-Shabab militants have moved to the semi-autonomous Puntland region after being driven out of their strongholds in the south. Politicians from Puntland blame the region’s government for creating conditions for insecurity.
This week, al-Shabab militants attacked an army post in the Galgala mountains of Puntland, killing at least 10 soldiers, in one of the deadliest strikes by the group in months.
The attack underscored the growing presence of al-Shabab in northeastern Somalia and the real security threat still posed by the militants.
After being defeated by African Union, Ethiopian and Kenyan forces in the south, and expelled from the commercial hub of Kismayo in October, the militants have reportedly been seeking refuge in the mountainous regions of Puntland.
Challenges
Abdullahi Ali Barre, a businessman and politician from Puntland says the regional government does not have the military capability to confront the militants in this terrain.
“Galgala is more or less like Afghanistan. It’s like Tora Bora. It’s very difficult to enter. And I don’t think they have the equipment or aircraft for the government of Puntland to get into Galgala, so what is actually required right now is to get assistance from the international community.”
The United Nations monitoring group report on Somalia released earlier this year says al-Shabab has joined forces with local militias in Puntland and has received financial and material support from local business owners.
Local supporters
One of the biggest supporters, according to the U.N. report, is a former warlord named Mohammed Said Atom, who helped to broker arms deals for the militants.
Chairman of the Somali Justice and Development Party and a key political figure in Puntland, Ali Abdullahi says without a strong judiciary in place, Atom’s influence has gone unchecked.
“He’s a mercenary who’s hired by whoever gives him funds and weapons. He’s a criminal and criminality has to have justice brought onto it. The problem we have in Puntland is there is no justice.”
Abdullahi says one of the biggest problems in Puntland is the lack of governance, which he blames on regional President Adbirahman Mohamed Farole.
He says Farole has shown a lack of leadership for the region’s security forces, prompting police officials to resign.
Signs of collusion
Abdullahi also accuses the U.S.-trained Puntland Intelligence Service (PIS) of colluding with al-Shabab.
“So this is the issue which I think the U.S. government must look at, at how the PIS is funded and at the operational activities and how that funding is used and where that equipment goes to, because the guys who were fighting recently in the Galgala mountains were using night-vision goggles. Where did they get this from?”
Claims that al-Shabab used night vision goggles or that they are working with the PIS could not be independently verified.
Security remains a huge challenge not only in Puntland, but in the rest of Somalia as well, which was left with a dysfunctional national army after more than 20 years of civil war.
Somali political analyst Abdiwahab Sheikh Abdisamed says without better security forces in place, al-Shabab will continue to operate throughout the country.
“As long as governments are not willing to train the security apparatus, then they are there. They are in Mogadishu, they are in Kismayo, as we talk right now, they are in Puntland, they are in Somaliland. They have a strong network.”
The African Union peacekeeping mission in Somalia, AMISOM, credited with bringing relative security to Mogadishu and other parts of the country, is to begin training the Somali National Army next month.
Still, al-Shabab has shown, with the recent assault in Puntland, and attacks in the town of Jowhar outside of the capital, the group still presents a serious security threat.
Posted by Unknown at 6:08 AM