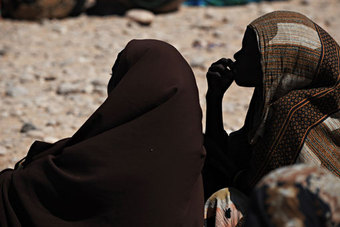 two Somali women in Puntland  front of the Somali National Security Agency (NSA)
Every day nearly 60 women gather in front of the Somali National Security Agency (NSA) detention centre in Mogadishu to see what has become of their loved ones who are accused of terrorism, subversion or affiliation with al-Shabaab.
For most of these women, they can only lament, as the crimes their husbands and sons committed on behalf of al-Shabaab have ruined their families' lives.
"I bear witness that al-Shabaab brainwashes youths and other valuable members of society they use [to carry out] their hostilities and explosions," said Leilo Adan Agane, 25, wife of Yonis Said, who has been in prison since October 11th and is still awaiting trial.
She said her husband was arrested in Mogadishu's Hodan district in an early morning operation. "He had three hand grenades and a pistol in his possession. He was accused of planning a terrorist attack," she told Sabahi.
"Therefore, I admit that al-Shabaab destroyed my family when they armed my husband by exploiting his lack of employment," Agane said. "I am stating emphatically that I regret this, and I am asking Somali parents to protect their children from being recruited by al-Shabaab, which destroys the hopes of Somali families."
For 29-year-old Hibaq Abdirahman, an eight-month pregnant mother of three, her husband's crimes have left her desperate.
"I ask that [my husband] be released because he financially supported our family and I cannot support my children and mother, and my brother is mentally ill and I cannot [afford] to send him to a hospital," she told Sabahi.
Abdirahman said her husband worked at a small shop in Bakara market in Mogadishu. Security forces detained him along with dozens of other militants late at night in the Hodan district, she said.
"I do not know what has become of him, but I miss him," she said.
Faiza Ibrahim, 27, said her husband was arrested on November 7th after he threw a bomb at a Somali police patrol in the Heliwa district in north-eastern Mogadishu, a former al-Shabaab stronghold.
She visits the prison every day to bring her husband food, but she has not been able to see or speak to him. All Ibrahim can do is let her imagination run.
"I have heard from former prisoners that hundreds of inmates are chained in a big underground cell without any windows, lighting, bedding or blankets to sleep on," she told Sabahi. "They are given food through an opening in an iron door […] and can only see sunlight at 10 o'clock in the morning."
Shukri Yusuf Omar, a 49-year-old resident of the Yaqshid neighbourhood of Mogadishu, said her son and his wife have been detained by the intelligence services for the past four weeks. They face charges of sheltering terrorists in their home as well as concealing weapons and explosives in a hole hidden in one of their bedrooms, she said.
Omar said she has requested that the authorities release her son and daughter-in-law or put them on trial without delay.
"I can guarantee that neither of them will go back to what they were doing because prison is not a walk in the park," she told Sabahi.

The NSA detention centre, previously known as the Investigation Centre of the October 21st Socialist Party, is situated on a hill next to the presidential palace in central Mogadishu.
The building comprises two floors, one of which is for female inmates and offices for investigation officers, while the other is a large hall for male inmates, said Isse Ali, who works in the NSA's data and image analysis department.
Ali said investigators do not use torture tactics against prisoners, but they do isolate them from family and friends while the undergo interrogations.
"At the beginning of detention, detainees are banned from seeing their families for a certain period of time and are cut off from the outside world," Ali told Sabahi.
Investigators collect additional information by using undercover officers who pretend to be prisoners, he said.
After the investigation is completed, prisoners are sent to the central prison close to Benadir Court to await trial, he said.
Posted by Siad barre at 8:40 AM