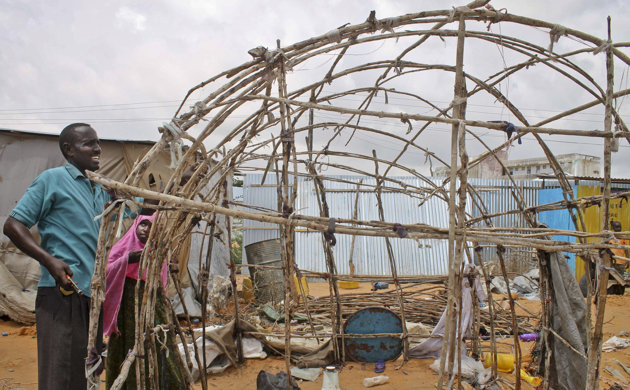 MOGADISHU, Somalia (AP) - In parts of Somalia's capital, rubble-strewn lots that once served as sniper positions have been rebuilt into well-maintained homes, hotels and shopping plazas. Housing prices have doubled, or even gone up ten-fold.
More than a year of relative peace in Mogadishu has led to a property boom, but one that comes at a bitter price for the poor and those who were victimized by two decades of war and anarchy in this Horn of Africa nation.
Eager to cash in, landowners are forcing out thousands of squatters and other families who can't afford the higher prices, leaving them no recourse but to move to camps for displaced people on the edge of Mogadishu where there are no services or security. The government earlier this year also forced out thousands of people who had been living in government-owned buildings.
Those who fled fighting in other parts of Somalia or the harsh Islamic rule of al-Shabab militants in the south in the past years and who set up in empty lots in the capital, forming impromptu refugee camps, now find themselves having to move again.
Inside the Sigale camp in Mogadishu, dozens of families on a recent day discussed their pending eviction. Next to their tents their belongings sat piled up, ready for the journey.
"We have no choice but to go," Nurto Yusuf, a mother of eight said, standing near her husband's handcart. Her children played soccer nearby. "The stability is giving opportunities to the rich and depriving the poor. We don't know where to go."
Rapes have occurred at the sunbaked Maslah camp, which is now home to thousands of families, some of whom say they were forced to leave their former abodes at gunpoint and with no advance notice. The camp is surrounded by thick shrubs, and many women stay up at night, fearful that a rapist might be lurking around. There are no toilets and the women risk attack if they use the surrounding bush at night.
"I was raped two nights ago when a man with a knife stopped me near my hut," one refugee woman with five children said through tears. The Associated Press does not typically identify sexual assault victims. "There is no protection, no housing. We are vulnerable to rape and hunger."
Marion McKeone, a spokesman for the Save The Children, said there is no food, water or humanitarian services for the internally displaced persons.
"These people are being forced out of the makeshift homes and settlements in the city to wastelands beyond," McKeone said. "These families remain among the most vulnerable in Somalia. For them there is no prosperity. They have fled drought and conflict, they have been uprooted from their homes and now they are being uprooted again."
Over the past few weeks, thousands of people have been evicted from school buildings in the Hodan district. Refugees said that a Turkish developer had promised the land owner a large sum of money to rehabilitate the buildings.
In the seaside city, a home that sold for $50,000 during the intense fighting between 2006-2011 now can cost $100,000. Rents have also doubled. A two-story home with three bedrooms that once rented for $500 a month now goes for $1,000 or more. Property values close to the international airport, where African Union troops are based, have risen even more, sometimes five- or ten-fold.
The well-heeled Maka Almukarramah Road, which boasts hotels and shopping plazas, in particular is experiencing sky-rocketing prices.
The fledgling government, which is trying to exert authority over Mogadishu and the rest of the country, isn't able to address the housing crunch.
"This is quite a challenging issue to the government. Even (the refugees') presence in the city is posing a security threat," said Abdihakim Guled, deputy chairman of the Somali Disaster Management Committee, an independent body that oversees refugees for the government.
Lamented one refugee mother, Hawalul Ibrahim Maalin: "Mogadishu is going to be for the rich. And for the poor and refugees, the awful bush."
Posted by Unknown at 8:08 AM