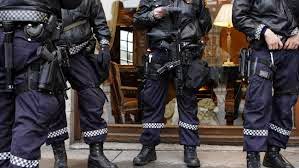 STOCKHOLM (AP) — Norway's security service says three men with alleged links to an al-Qaida splinter group have been arrested on preliminary charges of supporting or participating in a terror organization.
The PST security service said Tuesday the three suspects are Norwegian citizens aged 29, 27 and 24. The oldest was born in Somalia and the other two were born in the former Yugoslavia.
PST said two of the suspects have been fighting for the jihadist group Islamic State of Iraq and the Levant, which is fighting in Syria.
The agency said the three were arrested "to prevent additional support or adherence to ISIL," which is considered as a terrorist organization under Norwegian law.
PST earlier this year said about 40-50 people have left Norway to join militant Islamist groups in Syria.
Posted by Siad barre at 6:48 AM