Somalia: Somali Legislators Call On the President to Resign 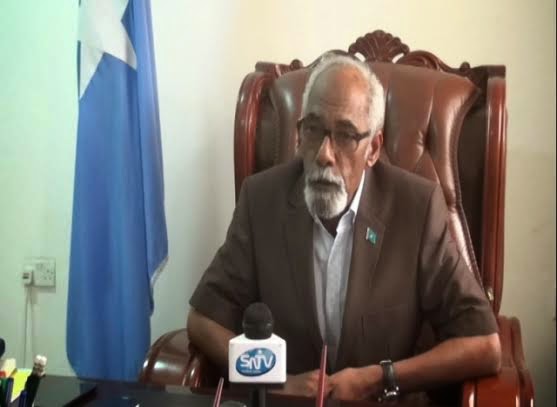 Mr. Mohamed Sheikh Osman Jawari - (Speaker of the Somali Parliament)
press release
Almost 130 legislators gathered together at a hotel in Mogadishu, they called on the Somali President Hassan Sheikh to resign in a strongly worded letter:
Federal Republic of Somalia
Date: 05/05/14
To: President Hassan Sheikh Mohamud - (President of the Somali Federal Republic)
CC: Mr. Mohamed Sheikh Osman Jawari - (Speaker of the Somali Parliament)
CC: Ambassador Nickolas Kay - (UN Special Representative of the Secretary General)
Re: Call for resignation
Dear Mr. President,
We, the Somali legislators listed below are fulfilling the duties expected of us to protect the state affairs of Somalia, and have therefore decided to call on you (President Hassan Sheikh Mohamud) to resign after we have found you incompetent of carrying out the pledges you made when you stood as presidential candidate in 2012. We have noted that if you had acted out the 6 pillars you stated in your presidential campaign, the country would be in a much better state than it is in now and overcome the years of anarchy following the fall of the central government in 1991, in terms of politics, security, economics, good governance, social development and reconciliation.
A considerate number of us have discovered that you Mr. President have failed in:
Strengthening peace in the country, creating high judiciary system and good governance
Reviving community and social spirit among the society
Enforcing peace and reconciliation
Enlivening the country's financial institutions
National unity and harmony
Creating international relations with foreign governments and agencies
These 6 pillars, announced by you Mr. President in your 2012 presidential campaign was the main and vital reason that we, the legislators of the Somali parliament elected you as our president.
Now that we have seen that your leadership has failed in:
Developing clear and reasonable plans in enforcing peace in Somalia build regional administrations for the Somali people; implement federalism based on justice and good governance.
Reviving public services for the society: higher education, health, water and energy.
Enforce safety in Somalia, form strong and obsolete security forces that have the ability and strength to protect the safety of all Somali citizens. Also in resolving clan tensions that have become consistent in Hiran, Lower Shabelle, Middle Shabelle regions & other poor regional administration governance.
Stopping political interference among politicians that might aggravate the armed enemy (al-Shabab), to know that to end this war against the enemy is not just using the military but political means and negotiations.
Battling corruption against senior officials in the government, developing functioning financial institutions and generate revenue from customs at the seaport, airport, etc.
Continuing the peace talks with Somaliland, but shortening them.
Refuting diplomatic relations with Kenya, closing the Somali embassy in Nairobi due to the persistent mistreatment of Somalis in that country (whilst you were there too).
Being successful in appointing regional governors and district administrations in regions/districts liberated from al-Shabab. This gave the terrorists a chance for them to recapture the towns and barricade government troops entering through the borders.
Your leadership has failed in implementing proper justice system in the country, and failing to carry out the topics agreed in the National Security Conference held in Mogadishu in April 2013. You also failed in founding the Constitutional Court which is a violation of the 109th article, 2nd sub-topic.
Appointing committees consisting of independent individuals to fight corruption, as listed in the constitution in 111th article, which caused government expenditure and property to be stolen through corruption.
Reconciliation among Somali clans/tribes and regional administrations, and appointing a reconciliation committee, on the 111th article in the constitution.
Your leadership failed to secure the safety of Somalia in where government institutions like courts, presidential palace and United Nations compound was attacked as well as murders of legislators, government officials as well as civilians.
Allowing national documentation and passports to be taken, this is violation of the 8th article in the Somali provisional constitutions.
That your leadership has shown incompetent in being able to participate in carrying out democratic elections in August 2016.
Because of the reasons we outlined above, we ask that you, the Somali President (Hassan Sheikh Mohamud), take this letter wisely and resign from your title.
Yours sincerely,

Somalia Cartoon of the day President Hassan of Somalia is finally in the ring, in struggle with the Somali PM's 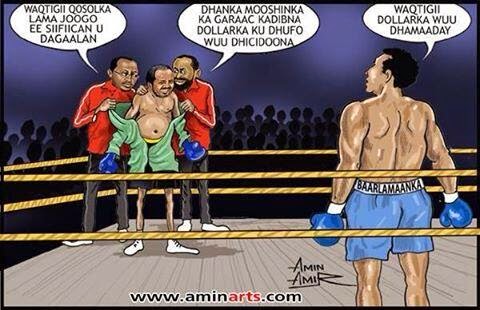