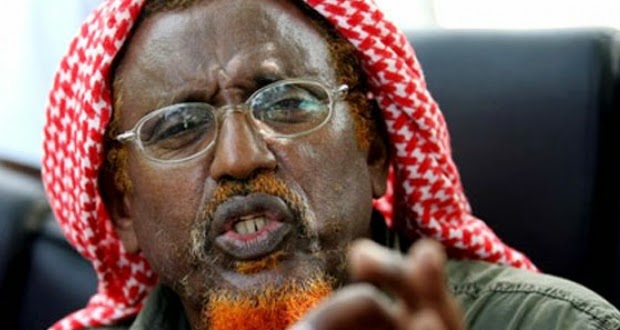 English translation
Mogadishu (terror free somalia ) The well known Islamist commander  Terrorist Sheikh Hassan Dahir Aweys who has defected from Al Shabab 11 months has released his fist audio message under the detention of Somali government saying the country in under the colony of AMISOM and Ethiopia.
In this audio message released on Tuesday, Sheikh Aweys surprisingly congratulated the 71th anniversary of the Somali Youth League, a national youth club that fought for the country’s Independence starting from 1943 until 1960 when Somalia gained its independence.
“I want to call the youth, it is you who have to prepare something for the people. Take your responsibility,” Sheikh Aweys said.
“There are so-called federal states in the country holding the name and identity of clans; it is Majerten’s government [Puntland], it is Isaq government [Somaliland], it is Rahanweyn government [South west], it is Ogaden government [Jubba], it is Hawiye government [FG]” Skeikh Aweys said.
Sheikh Aweys who is currently under house arrest in Mogadishu has described the leadership of Somali government and the federal states in Somalia as puppet groups serving for Addis Ababa.
He said AMISOM contributing countries are the Somalia’s enemy in tradition “they invaded to take over our land” he added.
The timing of the audio message seems to coincide with Youth Day on 15th May, which is meant to commemorate the Somali Youth League.
Speaking on his current views on Al Shabab, the Al Qaeda-linked group which he has once merged with his former Hisbul Islam function, Sheikh Aweys criticized the group’s war on the Somali people.
“Unfortunately Al Shabab has turned ti Somali citizens by killing scholars, youth, elders and politicians,” he added.  “This led to negative aspect of the name of the jihad war.”
He said it was very destructive stand that Al Shabab’s leader was not willing to listen the critics against Al Shabab.

I don't understand why he's not in Guantánamo Bay prison "
Posted by Unknown at 6:14 AM