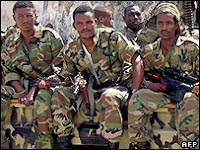 The Ethiopian army contingent, which is normally based in the outskirts of Beletwein, entered the town around 10pm local time.

Somali officials in Beletwein told that the Ethiopian soldiers will take part in efforts to secure the seat of government in Hiran region, which borders Ethiopia. Witnesses said Ethiopian soldiers armed with assault rifles were on foot patrol throughout Beletwein city streets alongside Somali government troops.The Ethiopian soldiers erected temporary bases at strategic locations inside the town, including the police station, the main city bridge and atop hotels.Hotel owners and some residents expressed anxiety about the possibility of attracting insurgent attacks, since Islamist-led insurgents have vowed to attack any place where there are Ethiopian soldiers present. On Saturday morning, the Ethiopian soldiers returned to their base in the outskirts of Beletwein, leaving security control over to their Somali government allies.Locals said this is the first time they have seen Ethiopian combat troops on foot patrol during routine security operations.Six suspects were arrested yesterday, including a Beletwein businessmen, for alleged links to Thursday night’s deadly raids on key government installations.