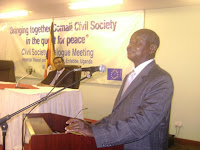 “Localism, parochialism, and tribalism are the signs of a pre-industrialised society. Somalia fits that description at the moment,” said President Yoweri Museveni at the Somali civil society Dialogue meeting in Uganda. The president started his speech by explaining the genesis of Somalia’s problems. The president said, “I suspect the problem of Somalia is underdevelopment. And it is you who can help Somalia through economic development.” The president went on to explain how economic interests have saved Europe and other countries. The president also highlighted how opportunist actors contribute to Somalia’s ills. “Somalia has become a laboratory for all opportunists and if you want to know more about opportunists, Somalia is the best laboratory to experience it.”The meeting which entered its second day also heard from representatives from different institutions. Ms. Mila Font from the European Commission (EC) has presented a Country Strategy Paper (CSP) commissioned by the European Union and Norway. The study has made need assessment and categorised identified needs under three pillars namely a) the security, human rights and rule of law b) need for basic services such as education, health, etc c) economic growth. Ms. Font added that CSP had allocated nearly 150 million Euros for European projects in Somalia for 2008. The CSP has generated hot discussions on several issues. The issues raised included the need for re-assessment as the input used for developing CSP seem to be outdated as the situation on the ground has changed and the need for involvement of local stakeholders.Ms. Font also chaired the first panel of the day which focused on how to strengthen the role of non-state actors (NSA). The panellists included Faiza Loyan, from Saferworld, Ahmed Gacal, the Chair of SOSCENSA, Mohamed Hussien Enow, a researcher from VRD/NSA and Mohamed Barre Muse from Somali Civil Forum.There was another plenary session entitled: Harmonising Somali Peace and Reconciliation Processes. This session was chaired by Nuradin Dirie of UNICEF Somalia and the panellists were Walid Muse, an expert to the European Commission, Deka Ibrahim from Concerned Citizens for Peace (Kenya), Dahir Mohamud Gele from Iqra Radio and former Spokesman of the Islamic Sharia Courts, Dahir Mire Jabril, an independent consultant, Abdirahman Osman Raghe from Interpiece, Ken Menkhaus, professor of Davidson College. The panellists discussed the challenges Somalis peace and reconciliation processed had faced and identified ways to overcome those challenges.
Today is the last day of the meeting and expected to agree a strategic vision for civil society engagement in peace building.
Posted by Siad barre at 6:38 AM