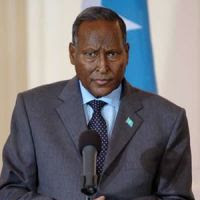 , Somalia - The president of 's UN-backed transitional federal government flew from the capital Monday to , where a summit of Muslim nations is set to begin.President Abdullahi Yusuf was accompanied by a government delegation that includes Cabinet ministers and lawmakers.The delegation was reported to have reached the Kenyan capital, , for a brief stopover on their destination to . is on the agenda of the Organization of the Islamic Conference (OIC) , which will also tackle conflicts in the Muslim countries of , , and growing Islamophobia across the world.Since early 2007, the Horn of Africa nation of approximately 10 million people has faced a bloody insurgency led by Islamist guerrillas, who want Ethiopian troops backing Yusuf's interim government to leave the country.A roadside bomb killed at least three people in today, including two Somali soldiers.Witnesses said the source of the explosion was a landmine, which hit a water truck as it drove towards an Ethiopian army base in north .Ethiopian soldiers aboard an armored truck following the water truck opened fire at nearby civilians, wounding three people, according to witnesses.