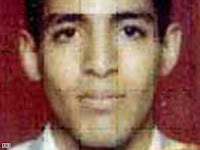 WASHINGTON (CNN) -- A U.S. missile strike in southern Somalia on Monday targeted a man wanted by the FBI, according to a senior U.S. official.Saleh Ali Saleh Nabhan is wanted for questioning in 2002 attacks in Kenya, including a hotel suicide blast.It is unclear whether Saleh Ali Saleh Nabhan was killed when a U.S. submarine fired a tomahawk missile at the target, the official said Tuesday.
The FBI wants Nabhan, 28, for questioning in the 2002 suicide bombing of an Israeli-owned hotel and the unsuccessful attack on an Israeli charter jet in Mombasa, Kenya.Ten Kenyans and three Israelis were killed when three suicide bombers detonated a car bomb outside Mombasa's Paradise Hotel.The bombing took place within minutes of an unsuccessful missile attack on an Israeli charter jet, which was taking off with 261 passengers and 10 crew members.More than 200 people were killed and 4,000 wounded in the attacks, most of them Kenyans.Don't Miss U.S. fires missiles at Somalia terror targetThe U.S. military has long sought Nabhan because he is believed to be deeply involved in al Qaeda's East African operations, the senior official said.
The FBI announced in February 2006 that it was seeking information on Nabhan and any possible links to those incidents.The Pentagon on Monday confirmed that the U.S. military struck "a target against a known al Qaeda terrorist."The strike hit near the town of Dhoobley along the Somali-Kenyan border, a U.S. military official said Monday.It was aimed at a "facility where there were known terrorists" affiliated with East African al Qaeda operations, the official said. Video Watch report on what U.S. calls a precision strike The strike destroyed two houses -- killing three women and three children and wounding another 20 people, said Dhoobley's district commissioner, Ali Nur Ali Dherre. Dherre said the remains of the missiles were marked "US K.
Posted by Unknown at 10:47 AM