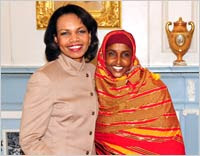 Secretary of State Condoleezza Rice hugs award recipient Farhiyo Farah Ibrahim of Somalia. (State Dept.)Washington -- Ambassadors and other diplomats, members of Congress and leaders of nonprofit organizations gathered at the U.S. Department of State March 10 to honor eight women who have risked harassment and death to fight for women’s rights.“In too many parts of the world, unfortunately, women still struggle for basic rights and liberties in places where discrimination and exploitation and violence against women is all too common and all too often accepted or tolerated,” Secretary of State Condoleezza Rice said at the awards ceremony.The 2008 award recipients, she said, “also represent many other women around the world who fight and sacrifice so that future generations may benefit from human rights protections, access to justice and democracy, and greater prosperity and personal security in their countries.”This year’s winners are Suraya Pakzad of Afghanistan, Virisila Buadromo of Fiji, Dr. Eaman al-Gobory of Iraq, Valdete Idrizi of Kosovo, Dr. Begum Jan of Pakistan, Nibal Thawabteh of the Palestinian Territories, Cynthia Bendlin of Paraguay and Farhiyo Farah Ibrahim of Somalia.
The Women of Courage Awards were first awarded in March 2007. The initial group of honorees represented Afghanistan, Argentina, Indonesia, Iraq, Latvia, Maldives, Saudi Arabia and Zimbabwe.Rice said that “no culture, no religion and no tradition of any nation provides license for treating women as objects or instruments to be commanded by another.”UNITED STATES “DEEPLY COMMITTED” TO WOMEN’S RIGHTS
“The United States remains deeply committed to helping women of courage everywhere to peacefully remove the barriers to political, economic and social empowerment for themselves and for others,” Rice said.Paula Dobriansky, under secretary of state for democracy and global affairs, presented each woman with a trophy, and noted that “when women stand up for their freedom, all of society benefits.“When women are educated, have access to health care and are active and productive members of their country’s economy and governments, their countries are better equipped to reach their full potential,” Dobriansky said.

Guests at the awards ceremony included Samir Sumaidaie, the ambassador to the United States from Iraq; Tayeb Jawad, the ambassador to the United States from Afghanistan, and his wife; Representative Marsha Blackburn of Tennessee; Representative Nita Lowey of New York; Ambassador Ellen Sauerbery, the State Department’s assistant secretary for population, refugees and migration; and Ambassador Shirin Tahir-Kheli, senior adviser to the secretary of state for women’s empowerment.Also in attendance were representatives of American Women for International Understanding, a nonprofit organization that will be holding a dinner to honor the Women of Courage awardees at the National Press Club and will present each recipient with a $1,000 grant.During their Washington visit, the awardees met at the White House with the president and first lady and with members of the U.S. Congress.March 10 is International Women’s Day. Among the activities planned at the State Department is a gathering of judges and legal practitioners from around the world to discuss action that can be taken to prevent violations against women such as rape, domestic violence, human trafficking and prostitution.For additional information, see profiles of Suraya Pakzad, Virisila Buadromo, Eaman al-Gobory, Valdete Idrizi, Begum Jan, Nibal Thawabteh, Cynthia Bendlin and Farhiyo Farah Ibrahim.

See also a transcript of Rice’s and Dobriansky’s remarks and the full text of the secretary’s statement on International Women’s Day.