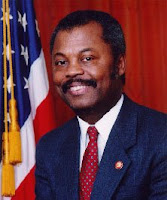 The current violence in Kenya and Chad brings renewed focus upon the serious challenges in Africa, and underscores how important it is that America act wisely and send consistent and appropriate messages. During a recent trip to Eritrea—just as Kenya was beginning to erupt—Rep. Donald Payne did neither.

With the United States fighting a global war on terror, the notion that a Member of Congress would sit silently beside a terror-sponsoring dictator as he criticizes America is appalling. Yet that is reportedly what happened during Rep. Payne’s January visit to Eritrea, a country without press or religious freedom that openly supports al-Qaeda linked jihadists.

It is bad enough for any U.S. official to behave this way—but far worse when you consider that Payne chairs the House Subcommittee on Africa and Global Health, an influential leadership post that has an impact on U.S.-Africa relations.

As a Somali-American I am deeply concerned about the message Rep. Payne’s trip sends—and the impact engaging Eritrea may mean to the fragile stability in Somalia and the entire Horn of Africa.

For more than a decade, Somalia has been a lawless state with no central government. With Ethiopia’s strong support, the Transitional Federal Government (TFG), which is backed by the United States and the U.N., is working to restore legitimate leadership to Somalia and to improve its standing in Africa and around the world.

Thwarting this progress toward stability and peace is the Islamic Courts Union (ICU), a radical Islamist group whose leaders have proven ties to al-Qaeda. The ICU seized power in 2006 from the legitimate TFG and formed an alliance with Eritrea.

A 2007 U.N. report detailed extensive Eritrean support to the jihadists wreaking death and destruction among my brothers and sisters in Somalia. In addition to supplying training and financial support, Eritrea has sent suicide vests, machine guns, rocket-propelled grenades, anti-aircraft guns and portable surface to air missiles. The deadly impact these weapons have had in the hands of the terrorists should be well understood by Americans who bear the haunting memory of the Black Hawk Down disaster in 1993, when 18 American soldiers deployed to Somalia on a humanitarian mission were dismembered and dragged through the streets.

In response to Somalia’s request for assistance, Ethiopia sent troops and effectively defanged the ICU terrorists. Since being routed, the Islamist fighters have regrouped and are waging a low-level insurgency aimed at driving out Ethiopian troops helping to secure Somalia.

By visiting Eritrea, Rep. Payne communicated clearly his overall goal: moving the balance of power in northeast Africa away from Ethiopia and toward Eritrea. His visit took place despite the State Department’s announced intention to declare Eritrea a state sponsor of terrorism. This visit raises serious questions about the real intent of H.R. 2003, a bill that Payne authored and pushed through the House in 2007.

H.R. 2003 is a dangerous piece of legislation because it is a full frontal assault on Ethiopia. It threatens to cut off aid to the country that kept Somalia from falling into the grip of an Islamist regime and is playing a key role as a U.S. partner in the war on terror. The radical terrorists that have wrecked my native Somalia are seeking to exploit the weak government in Mogadishu and gain a lasting foothold. They have vowed to fight on, while Osama Bin Laden himself has repeatedly called for jihad against Ethiopia and for radical Muslims to join the terrorists in Somalia who are attacking the peacekeeping forces helping to maintain order.

In the years shortly before September 11 forever changed the world, major terrorist attacks took place in the Horn of Africa. Al-Qaeda terrorists killed scores of Americans and Africans in large-scale, bloody assaults on U.S. embassies in Tanzania and Kenya. If those attacks have taught us anything, it is that the world cannot afford to ignore the terrorists, or to permit their sponsors to carry out their support with impunity.

Following Rep. Payne’s misguided visit, I visited Washington with dozens of other Somali-Americans from around the country to demonstrate at the State Department and on Capitol Hill and to meet face-to-face with our elected representatives. We delivered the message that the United States must continue to stand with Somalia—and with Ethiopia—which is helping to secure its future. And we reminded our lawmakers that states such as Eritrea that sponsor terrorists should be isolated—not coddled by key leaders in the U.S. Congress.

When it comes to the Horn of Africa, the stakes of are high. Our nation and its leaders must maintain moral clarity—and stand with allies who oppose terrorism and celebrate freedom and democracy.
Posted by Unknown at 10:06 AM