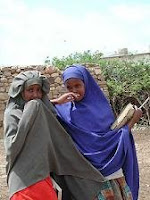 NAIROBI- A new survey by the UN children's fund, UNICEF, shows increase on Somali girls' enrolment but said much more must be done to shape progress for girls education in the Horn of Africa nation.The survey released on Friday as the world prepares to commemorate International Women's Day on Saturday said although the past ten years have seen a threefold increase in the number of girls enrolled in school in Somalia only one girl in four gets a primary education."This is a situation that must change rapidly because the education of girls will shape the progress we want to see for Somalia in terms of peace and development," said Christian Balslev- Olesen, UNICEF Representative for Somalia.With some of the worst school enrolment rates in the world, a recent Primary Education Survey of Somalia conducted by UNICEF shows girls' gross enrolment at 25 percent, while boys' gross enrolment is 37 percent.At present, only some 121,000 Somali girls attend primary school. By 2009, UNICEF wants to see that figure increase by at least 50,000.According to the UNICEF representative much more must be done and faster to achieve the Millennium Development Goals of gender parity and 100 percent enrolment of girls in primary school."The education of girls is paramount in the fight against poverty, against infant, child and maternal mortality, and against national under-development," said Balslev-Olesen."However, if wide-spread, large-scale resources are allocated to girls' education it would make a tremendous difference to the progress that Somalia can make in terms of recovery and reconciliation," he said.Seventeen years without a central government in Somalia has resulted in an education system that lacks a national education policy, copes with inadequate infrastructure and equipment and relies mostly on low-qualified volunteer teachers.Although UNICEF's work over the years with communities, local authorities and partners has yielded results in getting more children into school, especially girls, the children's agency wants local authorities and the international community to invest much more in Somalia's education sector.The UN agency is helping Somali girls to complete their primary schooling by addressing several of the factors that dissuade them from going to school, including poor sanitation facilities.
Posted by Unknown at 5:33 AM