Since the downfall of the Somali Government in 1991, the Somali clan system transformed itself in to the only feasible and palpable political entity of Somalia. That is to say, political allegiance was utterly assigned to the respective clan faction. Some of the faction leaders employed this allegiance to enhance their general motivations of personal aggrandizement by subjugating the community they were serving. This led them to embark on quests of land-grab and campaign of suppression under the pretence of chasing, what they referred to as, ‘old siyad bare govermant remnants' Others utilized this type of support in defending the territorial integrity and political status of their respective clan.A notable example of the latter Jubaland leader is such as Barre Aadan Shir 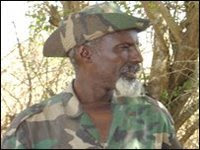 e (Hirale)Gen. Ahmed Warsame, (AHU) Col. Abdulahi Hasan , Col. Abdi Igal jaamac, Col. Abas guray , Col. Abdulahi Sheikh Ismail (Fartag) Other Military Leaders . During the early years of the civil war, the clan-faction, known as the USC, headed by the late Terrorist Gen. Caydid captured Gedo and the two Jubba lower, middle, a systematic effort was put in effect to marginalize the local populace of Gedo, in particularly the Sade clan whom the late president of Somalia Mahamed Siyaad Barre, was descended from.Gen. Ahmed Warsame, (Col. Abdulahi Hasan , Col. Abdi Igal jama, Col. Abas, Col. Abdulahi Sheikh Ismail (Fartag) Barre adan shire (hirale), jubbland Military Leaders upon hearing this, commenced a lengthy trip on foot from Wanlaweyn City (Lower Shabelle) to Gedo with the main purpose of dislodging the region from the Terrorist USC (hawiye) grip and free his people from the terrible ordeal inflicted upon them.After concluding the task, he transferred the rule and control of the region and his army back to its inhabitants and the political faction known as SNF fight Islamic extremism in the region (al-Itihaad al-Islamiya).http://en.wikipedia.org/wiki/Al-Itihaad_al-Islamiya During the late 90’s, a similar event unfolded where in a spree of persecution was initiated against the mareehan clan residing in the two Jubba from USC Hawiye with OGADEN , in particularly Kismayu in an attempt to forcefully evict them from these regions.MP Barre adan shire (hirale ), with a more then 40 men, arrived in Gobweyn with the aim to show Gen. Morgan and his allies the exact same path that the late (USC ) Leadar Terrorist Mohamad Farah Caydid went through when he occupied Gedo and the two Jubba both lowerand middle.This was at a time when many short-sighted individuals vehemently opposed mareehan Military Leaders such as Gen. Ahmed Warsame, (AHU) Col. Abdulahi Hasan (Afgabdhedle), Col. Abdi Igal, Col. Abas, Col. Abdulahi Sheikh Ismail (Fartag) Bare adan shira , initiative to liberate Kismaayo in 1998 by falsely using the pretext that mareehan, as a clan, cannot enter in to a state of war, ignoring the fact that a well-planned persecution was occurring in Kismaayo. Whilst the short-sighted group have failed in fulfil their objective of preventing Barre from liberating Kismayu, they have found alternate ways to try to undermine Barre’s leadership and plunge the mareehan clan under the authority of different clans.This is evident presently, where by mareehan delegates of the clan-based alliance that currently occupies Kismaayo have started a propaganda campaign aimed at mareehan because we stand in their way. and we are not fighting Ethiopian troops in somalia and in particular, specially the people of GEDO region of jubbaland stat of somalia were Hundreds of Ethiopian troops rolled into Somalia every day. The intention behind the campaign is to obstruct the people of Gedo from providing both moral and tangible support to their political leaders who have struggled to ward off foreign and clan incursions in Gedo and the two jubba lower and middle Jubb since 1991. Instead, they want to forcefully subdue the people of Gedo and marehaan in general under a clan-based alliance headed by Terrorist Col. Dahir Aweys the same individual behind the terrible turmoil in Gedo he ignited in the middle 90’s with OGADEN (ONLF) own Terrorist Col. Hasan Turki, the one responsible for the massacre of mareehan the wounded TFG soldiers(JUBBALAND ARMY ) of in Ogaden town of Bu’ale, 2006.
As the famous proverb goes, 'by ignorance we mistake, and by mistakes we learn'. It was 2006 that some of us mistakenly supported the clan-based ICU and did not see Hawiye Deception , wrap them self islamic shirt , did see the terrorist element inside Al Qaeda Own (al-shabaab) and OGADEN (ONLF )Hope we're going to finaly build Somalia Government after16 years no government. until they invaded Kismayu under the pretext of Islam, What made it possible that the same mistake is iterated again in August 2008 where by some of us once again blindly threw our unconditional support to the same faction that unlawfully invaded Kismaayo in 2006? Is it not apparent enough that 9 roadblocks were erected for our political leaders out of spite that they hail from mareehan clan? Is not it evident enough that the statement by a certain clan in the two Jubba labelled MP Barre adan shire( Hirale) 10-year Jubbaland rule as tyranny there by deliberately ignoring the years prior as an implicit verbal assault directed at marehan? From hawiye and ogaden [1] I will conclude this article with a general advice to people of Gedo and all Jubaland state both lower middle region , resist the online propagandic drive where some short-sighted individuals greatly wish to develop hostility between the people of jubbaland state of somalia and their political leaders stationed in Dolow.Getting Ready to To Liberty City of kismayu .We Should Never Forget our Historical Friends TPLF we have same value . Liberty and Justice for every one in Horn of Africa , that we struggle together since time of.Red Terror.. .the help us and involved the eridaction of terrorist in the region back in the 1990s.. is very hard to Support terrorist optologist HAWIYE PM NURE the head of TFG goverment . it is a matter of really TFG is very weak. against radical Islamic terrorist networks .thay NEVER did anything for Jubbaland region . PM or, The President's Never Set Foot in region .They are busy fighting them self in Baidio . but It’s time we start focusing on big picture . It's time to give full support regional government jubbland state of somalia .. the our Time Will come in the federal level.,.
opinion ..mailto:..Warsame101@gmail.com 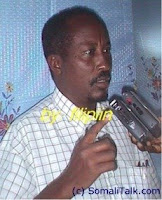 when Col. Abdi Igal jamac was the head of the tfg army in jubbaland region.. befor TFG Hawiye pm and leaders of TFG turn their backs against him ... cut off all war funding ..and undermining te war on terror.
he talk talk about .. July 2007..
Ethiopia troops in Somalia are "making a difference
http://nazret.com/blog/index.php?blog=15&m=20070716
Posted by Unknown at 12:51 PM