MOGADIHSU -An Terrorist Islamist group known as Hisbal Islam (Islamic Party) said Saturday it will keep fighting against Somalia’s new government led by president Sheik Sharif Sheik Ahmed and the AU forces in Mogadishu.Four insurgent factions agreed Wednesday to merge and continue fighting against the anticipated unity government of Somalia. “The so-called government led by Sharif Sheik Ahmed is not different from the one of Abdulahi Yusuf,” je 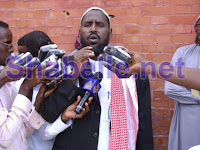 hadist said Omar Iman, who chairs Hisbal Islam.“The country was no freed from the enemy and Sharia law was not imposed, how we can stop Jihad (holy war),”jehadist Mr Iman added.Somali’s new president Sheik Sharif Sheik Ahmed arrived in Mogadishu on Saturday for the first time since he was elected president in Djibouti by the Somali Parliament last Saturday.President Sharif briefed reporters and said he came to Mogadishu to form unity government in Mogadishu and to work for the peace. The new, anti-government Islamic Party is composed of four factions – the Asmara wing of the Alliance for the Re-liberation of Somalia led by jehadist Hassan Dahir Aweys, Ras Kamboni Brigade, the Islamic Front, and a little-known group known as Anole
Posted by Unknown at 5:59 AM