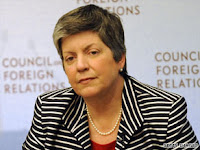 Communication among the various national security agencies charged with preventing future terrorist attacks has yet to reach a satisfactory level, US homeland, Security officials told senators Wednesday. While interagency information-gathering and -sharing has improved tremendously in the eight years since the Sept. 11 terrorist attacks, Homeland Security Secretary Janet Napolitano told members of the Senate Homeland Security and Government Affairs Committee on Wednesday that communication between federal, state and local law enforcement “is still in the developmental stage.”..more..http://thehill.com/homenews/administration/61051-dhs-intel-sharing-on-terror-lacking
Posted by Unknown at 8:09 PM