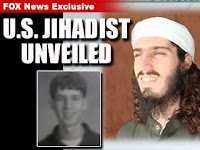 So the father of Al-Shabaab jihadist Abu Mansour Al-Amriki (aka Omar Hammadi), who we recently learned was raised in Mobile, Alabama gave an interview with WKRG-TV this week where he blamed US foreign policy on Somalia for his son's decision to get into the terrorism bizness.
But since Shafik Hammami is one of the primary leaders of the Islamic community in Mobile, his real purpose was to assure everyone that his son's radicalization didn't occur in Mobile, which is the first point he makes in the video below. His son was just magically translated to Somalia by the beneficence of Allah and was radicalized there in response to US foreign policy. Whatever.
Here's the interview: watchHot Tip from Jawa Report
Thanks again:http://mypetjawa.mu.nu/archives/198981.php

American Member of Somalia’s Terrorist AL-SHABAAB stories in the past
New Shabaab al-Mujahideen Video: "At Your Service, O' Osama" (featuring Abu Mansour al-Amriki)
Posted by Unknown at 7:30 AM