Another PR habar -gidir Hawiye Terrorist source ''maybe the telling the true..since He's One Of Them.

MOGADISHU (Reuters) - Somalia's al Shabaab insurgents have six more stolen United Nations vehicles primed as suicide bombs, the government said on Friday.
President Sheikh Sharif Ahmed's administration says it will not be bowed by twin suicide car bombs that hit the African Union's (AU) main base in Mogadishu on Thursday, killing 17 AU peacekeepers including the AMISOM force's deputy commander.
But the audacious attack by two U.N.-marked cars on the heart of the peacekeeping mission raises serious 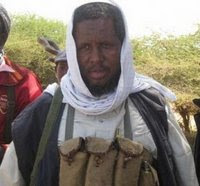 questions about the credibility of the deeply divided government, which controls little more than a few districts of the capital.
The state minister for defense, Sheikh Yusuf Mohamed Siad, a former warlord also known as "Inda'ade" or "white eyes," said the insurgents had seized more U.N. vehicles in recent months.
"We were all aware of their suicidal preparations but we never thought they would penetrate the AMISOM compound," he said. "We knew they were masterminding eight cars ... they are left with six more cars. That is cowardice."
Inda'ade said the bombings would not stop the government launching fresh attacks against al Shabaab, which Washington says is al Qaeda's proxy in the failed Horn of Africa state...MORE..http://www.reuters.com/article/worldNews/idUSTRE58H3KL20090918?feedType=RSS&feedName=worldNews

DO YOU KNOW WHO THIS MAN IS?

The state minister for defense?
I have been following hidir -gidir hawiye jehadist for Long-Time Let Me Tell You Something about This Islamic terrorists'

Yuusuf Maxamed Siyaad (Indhacadde)) AKA The state minister for defense???, Sheikh Yusuf Mohamed
He is the One of the most dangerous jihadist,last time i check he was listed on State Department Most Wanted somali Terrorist List .. i just Find Out ..Obama's administration.Remove the list from U.S. Department of State.. Web Side

He is a Former Terrorist Aydiid Commander USC Hawiye clan Black Hawk Down (2001)Become founding member Hawiye rebel group an Islamist Islamic Courts Union (ICU) in Somalia, and serves as the ICU's head of security affairs He is from the Ayr sub-clan , part of the habar-gidir , Hawiye Terrorist clan. He has served as deputy and financier for Terrorist Hassan Dahir Aweys , and served as the security chief Nick-named "white-eyed" (or Indhacadde), he was a former warlord who occupied Lower Shabelle in 2002. He later allied himself with the Islamic Courts. The Islamic Courts advanced to central and south Somalia regions, including the Kismayo area, before Inda'ade pledged his support, giving them control of Lower Shabelle region in September 2006 In December 2006, he appealed to foreign Muslim fighters to join his movement's Holy War against Ethiopia.
On December 12, 2006, he issued the ultimatum that Ethiopian forces should withdraw within seven days.On December 15, 2006, referring to the proposed IGASOM peacekeeping force, he warned African nations to not send forces to Somalia. On December , the deadline for Ethiopia came and went. Analysts considered Inda'ade's hardline stance had caused a split with moderates within the ICU. On December 20, after the Ethiopians refused to withdraw, he admitted fighting had begun between the two sides, marking the beginning of the war at the Battle of Baidoa.On December 21, 2006, as the fighting intensified with Ethiopia, he took a flight to an undisclosed location with Hassan Dahir Aweys, and was said to be on the hajj, the pilgrimage in Mecca,On December 23, 2006, as the battle continued, he made a world-wide appeal for jihadists to come to Somalia, and claimed the ICU had taken Tiyoglow, Bakol province However, in the days that followed, the army of the mostly hawiye ICU collapsed, leading to the Fall of mugadishu and the retreat of the ICU to their stronghold at Ras Kamboni he became part of the Islamist restance group, formed in January 2008 known as , Hizbul Islam . He however soon started an internal conflict in the group as he claimed to have removed the group's chairman `Omar Iman Abubakar said Sheikh OMAR Iman Abubakat AKA BABUHAR ADANI and replaced him with another Islamic cleric.hassan Dahir Aweys however expressed support for Omar Iman and critisized Inda'ade saying he "has made it normal to destroy every group he is part of. On May 17th, he defected to the Transitional Governme...NOW YOU KNOW THE REST OF THE STORY ..
soon will be the

Some Historical Background
The rise of the Shabab
In-depth Look At how did somalia became terrorist haven
Somalia at War – Between Radical Islam and Tribal Politics
Posted by Siad barre at 7:18 PM