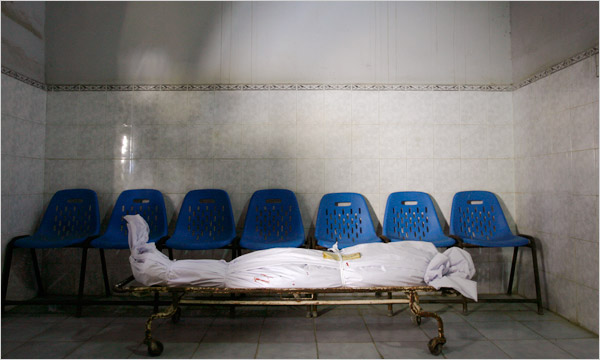 THE PRICE In the Muslim world, polls indicate, the death toll among Muslims in suicide bombings has driven down sympathy for Al Qaeda. This Pakistani was one of 140 killed in a 2007 attack

WASHINGTON — Eight years after 9/11, the specter of terrorism still haunts the United States. Just last week, F.B.I. agents were working double time to unravel the alarming case of a Denver airport shuttle driver accused of training with explosives in Pakistan and buying bomb-making chemicals. In Dallas, a young Jordanian was charged with trying to blow up a skyscraper; in Springfield, Ill., a prison parolee was arrested for trying to attack the local federal building. Meanwhile, the Obama administration struggled to decide whether sending many more troops to Afghanistan would be the best way to forestall a future attack.

But important as they were, those news reports masked a surprising and perhaps heartening long-term trend: Many students of terrorism believe that in important ways, Al Qaeda and its ideology of global jihad are in a pronounced decline — with its central leadership thrown off balance as operatives are increasingly picked off by missiles and manhunts and, more important, with its tactics discredited in public opinion across the Muslim world.

Marc Sageman, a former C.I.A. officer and forensic psychiatrist, counted 10 serious plots with Western targets, successful and unsuccessful, that could be linked to Al Qaeda or its allies in 2004, a peak he believes was motivated by the American-led invasion of Iraq the year before. In 2008, he said, there were just three.

Dr. Sageman has been in the forefront of those who argue that the centrally led Al Qaeda responsible for the Sept. 11, 2001, attacks is giving way to a generation of dispersed, aspiring terrorists linked largely by the Internet — who still pose a danger, but of a lesser degree.

“I said two years ago it was a diminishing problem, and everything I’ve seen since then has confirmed it,” Dr. Sageman said of what counterterrorism specialists call Al Qaeda Central.,more..http://www.nytimes.com/2009/09/27/weekinreview/27shane.html?hp
Posted by Unknown at 4:17 PM