U.S. military prepares for Horn of Africa mission.."What Took You So Long?" 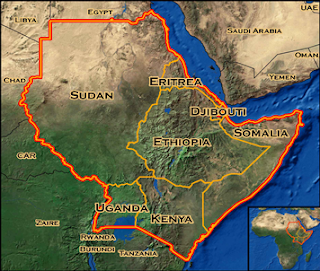 or is just another Obama hoax ?

U.S. military leaders preparing to deploy to Djibouti in January as the next headquarters staff at Combined Joint Task Force Horn of Africa just wrapped up the first phase of a new, four-part training program designed to prepare them as well as the follow-on task force for the unique, strategically important mission, according to Donna Miles of the American Forces Press Service.   The command was originally conceived as one that would block terrorists from coming into the region once their safe havens in Afghanistan and Iraq were gone. "The mission morphed from direct action to doing theater security cooperation," Hunt said during a recent interview. This overall term includes civil military cooperation, humanitarian assistance, military-to-military training, and capacity building to improve regional security.In the midst of this is Somalia -- the largest ungoverned area in the world. Some warlords in Somalia have adapted a Taliban-style government, and others are flirting with al Qaeda and al Qaeda influenced groups such as Al Shabaab.On the military side, this embraces border security, maritime security, and training units to handle things at a national level.But this is a huge region facing a potential humanitarian disaster, and one four-man Army civil affairs team in Ethiopia handles an area the size of Connecticut. And the region has almost the same coastline as the U.S. eastern seaboard.The core staff for the new headquarters spent last week with U.S. 2nd Fleet at Norfolk Naval Station, Va., where they focused on the academic, "big picture" issues associated with their upcoming deployment, Navy Commander Nick Mungas, U.S. Joint Forces Command's lead planner for the mission rehearsal exercise, told reporters Monday via teleconference.Army Gen. William E. "Kip" Ward, (the truth is ,  E. "Kip" Ward  is a coward  affirmative action  general . With No credibility nor integrity in the Region .  He was also accused of   Dictator malez sanawi and tribal entity sepretest lobbyists.. he  just get demoted  ..Here is the New  The incoming head of U.S. Africa Command ) story, cont....
the U.S. Africom commander and Navy Rear Adm. Brian Losey, the current task force commander, were among the presenters. They and Joint Forces Command facilitators provided a framework for the mission and the partnership relationships critical to its success, Mungas said.
Combined Joint Task Force Horn of Africa focuses on East Africa and Yemen, a region strategic because of its geographic location, resources, and struggles with instability, explained Navy Cdr. Tim Leonard, the current task force plans officer.The goal is to help African nations build capability so they can promote regional security and stability, prevent conflict and protect U.S. and coalition interests."This is not a mission CJTF HOA can accomplish alone," Leonard said. "We need to be part of a whole-of-government approach" that also includes State Department and U.S. Agency for International Development capabilities to deliver the "three D's:" diplomacy, development and defense."This is our chance, where we can come in and we can partner up with African countries that are willing to solve their own problems," Leonard said. "We have been able to partner with a group of countries to help them help themselves."It's a perfect opportunity for us," he said, "where it is in our interest as well as our African partners' interest ... to help them stabilize this area of the world which will, in turn, help our security interests back home."Based on the importance of the mission, Leonard said, it's critical the incoming task force's headquarters arrives in Djibouti ready to hit the ground running."They have to come in [on] Day One and be ready to perform, because we have to keep our effort going," he said.To ensure they're ready, Joint Forces Command begins a broad training program months before the deployment that continues after the task force staffs arrive in theater.Next month, Mungus said, task force leaders will put the lessons they've learned from last week's training into practice during a computer-assisted command post exercise at Joint Forces Command's Joint Warfighting Center in Suffolk, Va. Scenarios, based on input from current and former task force staffs, will include everything from the day-to-day nuts and bolts of making the joint task force work to higher-level planning operations at the strategic and operational level.Leonard emphasized that the training focuses on no single country or threat scenario. "It's more [about] teaching them a mindset that's very unique to this environment that most haven't seen before," he said.
After the task force deploys, Joint Forces Command interacts regularly with the staff and sends trainers to assess which training proved relevant and what needs tweaking to better prepare future headquarters staffs, Mungus said.Based on feedback, Joint Forces Command plans to launch a new addition to the training program. That training, to be conducted in Djibouti this spring, will be offered to the entire task force staff and build on actual on-the-ground experience, Mungus said. While the pre-deployment training focused heavily on processes, the in-theater sessions will focus on external interactions, and how to make them successful, he said.The final training stage will take place next fall, when a Joint Forces Command staff contingent will travel to Djibouti to observe operations and assess lessons learned during the deployment. Those lessons will be incorporated into the training scenarios for the leadership of the follow-on combined task force.Mungus compared the phased training cycle, one that Leonard described as a "learn-practice-learn cycle," to a television cooking show.Instead of simply showing participants a recipe or telling them how to prepare it, the approach enables them to demonstrate what they've learned and its outcome, he said."We'll show them what the recipe is, then get them in the kitchen and let them make some cookies, and then taste them and show them how tasty they were, after the fact," Mungus said. "And then we'll do that over and over again for all the different parts of their engagement cycle."