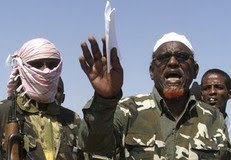 "He should put his focus on Al Shabaab who tried several times to eliminate him." Aweys is wanted by the US for connections to al Qaeda and has called for further suicide attacks in Somalia. Indha'adde was an ally of Aweys but defected from Hizbul Islam and... Full Article at The Long War Journal
Posted by Unknown at 9:38 PM