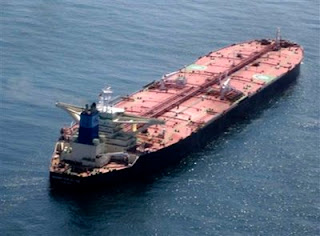 MOGADISHU, Feb 26 (Reuters) - A ransom was delivered to Somali pirates on Friday for the release of the Singaporean-flagged chemical tanker MV Pramoni hijacked in the Gulf of Aden on Jan. 1, maritime officials said.
Andrew Mwangura of the Kenya-based East African Seafarers' Assistance Programme said the ransom money had been delivered to the ship, but the vessel had not yet been freed. The EU naval force in the region confirmed the delivery of the ransom. Somali pirates told Reuters they planned to release the Singaporean-flagged vessel soon. The 24 crew consists of 17 Indonesians, 5 Chinese, one Nigerian and one Vietnamese. The number of piracy attacks worldwide leapt almost 40 percent last year, with gunmen from the failed Horn of Africa state

for more than half the 406 reported incidents, according to the International Maritime Bureau. Typically, the heavily armed Somali pirates hold captured ships and their crews hostage until ransoms are paid. (Writing by David Clarke)