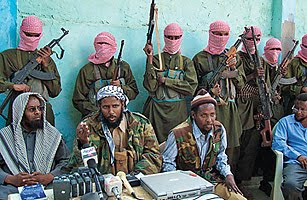 An internally displaced Somali woman cradles her malnourished child as they await rations at a food distribution centre in Mogadishu. The hardline Islamist Shebab militia has announced it has "banned" World Food Programme operations in famine-plagued Somalia, where the UN says half the population needs aid.

MOGADISHU (AFP) - – The hardline Islamist Shebab militia announced Sunday it had "banned" World Food Programme operations in famine-plagued Somalia, where the UN says half the population needs aid.The Al-Qaeda-linked Shebab movement, which controls most of central and southern Somalia, charged that food distributed by the UN agency had disadvantaged local farmers and accused it of political motivations."Given the problems caused by the food WFP distributed, the movement of Shebab Al-Mujahideen banned the operations of the agency in Somalia generally starting from today," the group said in a statement."The contractors working with WFP must avoid collaborating with the agency otherwise anyone working with the agency will be seen serving the interest of WFP," it added.The Shebab said they had received complaints from Somali farmers that the quantity of the WFP food aid prevented them from selling their own products at a fair price.The group also charged that the food was past its expiry date, and had caused people to fall ill, and alleged that it was disguised support for the formation of pro-government forces in Somalia.A senior member of the rebel outfit confirmed the ban to AFP."We have already given (WFP) chances to operate in Somalia but after failing to comply with the conditions we put forward, we totally banned WFP operations in Somalia," he said on condition of anonymity...more..

Somalia, Again, The Rise of Extremism in Somalia