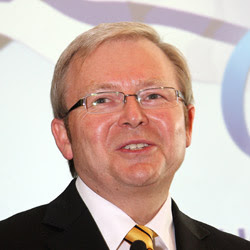 CANBERRA – The risk of an Australian committing a terrorist act is one of this country’s key security threats, according to Prime Minister Kevin Rudd.Flanked by Attorney-General Robert McClelland and Foreign Minister Stephen Smith, Rudd released the government’s Counter-Terrorism White Paper on February 23.In it, the Prime Minister made two key points about global terrorism. First, while there has been success in counter-terrorism activities in Afghanistan, Pakistan, Indonesia and the Philippines, at the same time, new centres for terrorists have grown in places like Yemen and Somalia.Second, there has been an increase of terrorists and potential terrorists born and educated in western countries, including Australia.
“Home-grown terrorism is now a reality we have to accept,” Rudd said at the White Paper’s launch.
He told Parliament that locally raised terrorists are “an increasing feature of the threat landscape of Australia”, adding that their motivation emanates from “jihad Islam”.However, in terms of strategies, the White Paper deals mostly with threats emanating overseas.The report’s flagship measure is to introduce a $69 million biometric visa program to prevent potential terrorists from 10 – as yet unnamed – countries entering Australia. The other main strategy is to create the Counter-Terrorism Control Centre, a body that will coordinate Australia’s different intelligence agencies.“The centre will drive a fully integrated, national approach to counter-terrorism,” McClelland explained.In the final few pages of the 73-page report, the government accepts more needs to be done to tackle extremism and radicalisation in local communities.
The report calls on state and territory governments, in conjunction with the Commonwealth, to address “the broader long-term causes of terrorism and violent extremism”. It lists these causes as identifying with particular ideologies and beliefs hostile to democratic values, negative economic and social circumstances and radical responses to overseas or local events.On further examination, though, information available about state and territory counter-radicalisation strategies is sparse.A staff member at the Attorney-General’s office pointed to police forces, multicultural services and local governments as the agents of these strategies, but had no cohesive list of projects being undertaken.Executive Council of Australian Jewry president Robert Goot emphasised the lack of focus given to the rise of locally grown terrorists.“I think the White Paper understates the shift that has occurred towards home-grown threats of terrorism and away from threats emanating from al-Qaeda and groups affiliated with or inspired by it,” Goot said.Since 2001, Australian courts have prosecuted 38 people for terrorism-related offences -– 37 of them Australia citizens and 20 born here.The Liberal Party also complained about the White Paper’s lack of focus on home-grown terrorism.Queensland’s Senator Russell Trood – formerly a professor of international relations – said the White Paper’s “greatest failing” is the disconnect between the threat of local terrorists and the policies put forward.“The paper provides no coherent counter-radicalisation strategies and allocates no funds to the task,” Senator Trood said.“The focus should be on developing programs that will prevent radical activity: forming closer links with local police forces and Islamic communities around the country; developing localised education and awareness programs, and intervening to combat online extremism, might be considered.”
And in a meeting of the Coalition party room on Tuesday, Deputy Opposition Leader Julie Bishop called the delay of this White Paper – which is months overdue – an example of the government’s habit of all talk and no action.
Posted by Unknown at 10:14 PM