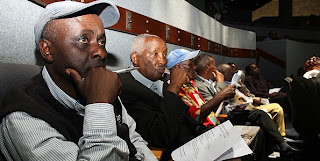 A meeting at the KICC. An Internet conference planned for the venue may be moved elsewhere because of security fears.
Kenya’s security forces have stepped up anti-terrorism surveillance ahead of a landmark Internet conference scheduled for next month in Nairobi that has been hit by delegates’ withdrawal over security fears. The fate of the Internet Corporation for Assigned Names and Numbers (ICANN) meeting now hangs in the balance as organisers consider alternative venues, less than a month after they assured that the meeting would proceed. “We are left with a situation where some people would choose to attend the meeting, and some choose not to attend, based on exactly the same information. One answer will clearly not work for all,” said Doug Brent, COO of ICANN.
Mr Brent said ICANN was now looking at possible alternatives to holding the meeting in Nairobi’s KICC after several participants said they would not travel to the country due to terrorism fears.One alternative being discussed by the ICANN board is remote participation where delegates would communicate with each other from various points in the world using video conferencing. A more radical proposal is to shift the entire meeting to another venue outside Kenya, which would significantly dampen confidence levels in the tourism sector.The developments come just a week after the US State Department apparently issued a fresh advisory against travel to the country, citing a new threat from Al-Shabaab al-Islamiya group.Mr Brent said the Kenyan government was taking the threats seriously enough to mount an unprecedented security exercise aimed at regaining the trust of visiting delegates.“Covert and overt security forces are being deployed at the KICC, hotels and venues where official functions will be held. Additionally, the airport, and road from the airport to hotels will be actively monitored and patrolled by security forces,” said Mr Brent.ICANN’s internal team — including staff from the US (California, Texas, New Jersey), France and Niger —continue to meet daily to discuss and share information related to the Nairobi meet.Last week, ICANN received an unclassified report from the United States’ Department of State related to the Kenyatta International Conference Centre, the venue for the upcoming meeting, that said the building was a key target for militants.

Information from US State Department said that as of early February 2010, it was aware that individuals linked to Al-Shabaab al-Islamiya were planning suicide bombing attacks on the US Embassy and KICC.
The statement from the US Department said the individuals were targeting the KICC because it was deemed the largest and oldest building associated with the Kenyan government.

The US Embassy was targeted for its support of the Kenyan government. ..more.
By Kui Kinyanjui Thursday, February 18 2010 at 00:00
Posted by Siad barre at 8:11 PM