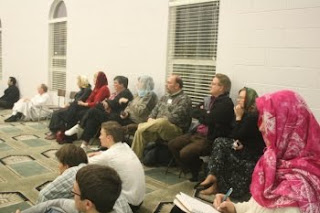 Muslim women wearing their colorful hijabs and men in their traditional Muslim thobes sat with many Christian visitors, covering their heads with winter scarves in the Khadeejah mosque in Salt Lake City recently.

As part of Salt Lake’s Interfaith Week this year, visitors from around the community came to observe the Maghrib and ‘Isha Muslim prayers in Arabic, the last of five prayers Muslims conduct daily.

Imam Mohammed Mehtar from South Africa spoke to the community, presenting the Islamic perspective in the current world while addressing rumors, common misunderstandings and the public’s questions.“Let’s say if I told you all you have to give throughout your life on a yearly basis is 2.5 percent to charity,” Mehtar said. “You will say you have no problem with it. But once I tell you, as a Muslim you must give 2.5 percent, what do you say? ‘Wow, where does the 2.5 percent go? Does it go to a Middle Eastern country? Does it go to rocket launchers or hand grenades?’ That’s not you that is asking that question. There is something out there that has prompted you to ask that question.”Mehtar explained how the media has slanted the view of Islam for many people and shed light on Muslim dress, terrorism, the meaning and creation of mosques and the process of becoming a Muslim.Imam Ali, another Muslim leader in Salt Lake from Somalia, clarified the rights women hold in Islam. Muslim women pray in separate areas from men and often wear traditional head coverings called hijabs or in more conservative Islamic countries, the burqa, which completely veils a woman’s head and face.“Allah created the human being equal,” Ali said. “There is no difference whether male or female, whether child or elderly, they are equal in the sight of that who has created them.”The public asked questions about the conflict between Israel and Palestine and the Jews and Muslims. Local Rabbi Avraham Shlomo provided perspective on the Middle Eastern conflict.“When I was young, my rabbi said to me, ‘When two people are fighting, the third person always wins.’ That is the lesson that needs to be learned in Middle Eastern conflict. While the Palestinians and Israelis are fighting each other, the two are losing.”“Many faiths, one family” was the theme and emphasis for this year’s Interfaith Week, reminding the community all people of different religious denominations are one earthly family.“In your learning you will find out the following: We are no different from you,” Mehtar said. “We are human like you. We have hair like you. We have the same emotions as you. We love our children just like you love yours. We have anger management issues just like you do. We have the same religious issues like you do, the same economic issues like you do, the same social issues like you do.”According to Mehtar, Utah provides an accepting environment for diverse cultures and religions.“Utah enables individuals to come into this country from a diverse background,” Mehtar said. “Utah is sanctioning diversity. We are enormously grateful to Utahns. Utah is considered a white state. Diversity is not in skin color; diversity is when you can share information between multiple parties. Utah may not give the perception of diversity, but it is very diverse.”Interfaith week concluded on Monday with a musical tribute at the Salt Lake Mormon Tabernacle. Among the performances were Hindu and Buddhist dances, a Muslim call to prayer and children’s choir from China.
Posted by Siad barre at 10:22 PM