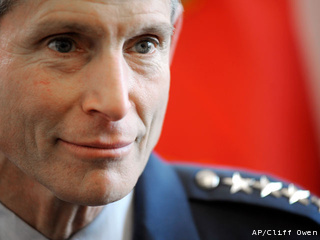 ADDIS ABABA, Ethiopia (AP) - The U.S. Air Force chief of staff told Africa's military leaders Tuesday that U.S. security interests on the continent are best served by building long-term partnerships with African nations and regional security organizations.
Gen. Norton Schwartz said that an airpower strategy focused on Africa would enable the U.S. and its African allies to address root causes of security problems before they manifest themselves through violence.
This would prevent lower-intensity challenges from festering into "larger-scale crises that we must confront," he said at the African Air Chiefs Conference in the Ethiopia capital, which is the headquarters for the African Union.
North Africa faces terrorism threats from al-Qaida in the Islamic Maghreb, while east Africa faces terrorism threats from groups in Somalia, such as al-Shabab, an ally of al-Qaida. Military cooperation is key to addressing those threats, said U.S. Air Forces Africa commander Maj. Gen. Margaret H. Woodward.
Woodward addressed concerns that the U.S. is trying to militarize the African continent, considering the role the U.S. and NATO are playing against Libyan leader Moammar Gadhafi. The African Union has denounced the foreign military action in Libya, saying it undermines finding an African solution to an African problem.
"Some may point to recent military operations in Libya and claim that we have not been true to our word," Woodward said. "The approach hasn't changed. Partnering with African nations to enable African solutions or African problems is still our primary philosophy."
Schwartz said he prefers long-term assignments to episodic or ad hoc relationships and interventions.
The general said he wants the U.S. Air Force to engage in more lasting and permanent programs facilitating, training and cooperating with security forces in Africa.
The U.S. Air Forces provide airpower to AFRICOM, the Germany-based U.S. military headquarters for Africa operations. AFRICOM primarily engages in military-to-military development programs and executes military operations. Its main goal is to defeat al-Qaida's network and promote stability and security in Africa to protect the U.S. population, its website says.