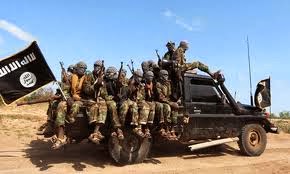 Mogadishu (tf.sf) – Intense clashes occurred last night in the town of Laag 30 km south of Bosaaso after suspected Al-Shabaab fighters attacked Puntland security forces loyal to the Farole’s government based in the area.
Residents in Bosaaso reported that the fighters belonged to the much feared Al-Shabaab movement who attacked the area from different directions and after fierce fighting briefly took control of the area which they left in the early hours of the morning.
According to locals who spoke to our correspondent both Al-Shabaab and the security forces used weapons ranging from light to heavy during the fighting which almost lasted an hour.
Reports say that at least five members of the security forces were killed and several others injured during the fighting which was one of the the fiercest seen in the recent months in the autonomous region of Puntland.
Local reporter  who talked with terror free somalia  said the attacks by Al-Shabaab are on the rise in the area, “The Al-Shabaab fighters are becoming more bold in their attempts and attacks, there’s political turmoil due to the elections which they’re taking advantage of, but more importantly I believe the security forces here are incapable of fending off attacks by militants like Al-Shabaab, this because Farole has taken the security forces more as personal guards and to defend his power, rather than using them to defend the public interests. Moreover our security forces are not used to attacks like these, unlike their counterparts in Mogadishu who have experience in engaging with Al-Shabaab, it’s high time that the security forces be given better and more up to date training in battling with Al-Shabaab.” Said the reporter
Al-Shabaab members who are believed to be based in the hills and mountains surrounding Bosaaso have been staging attacks  in the city past year, with the last major attack being two months ago when they tried to storm Bosaso’s main jail to free inmates.
Posted by Unknown at 10:59 AM