Somalia’s Coalition for Change condemns National Leadership Forum extension of term: PRESS STATEMENT-The Coalition for Change is a platform for political parties, forums, presidential candidates and politicians who have collectively consented to coordinate their activities in order to bring about a positive political transformation in Somalia leading up to the 2016 legislative and p...
Posted by Siad barre at 8:14 AM No comments: 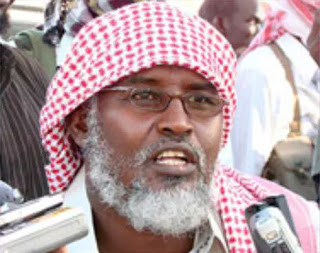 The U.S. military previously has used drones to target al-Shabab's senior leaders. In June, the Pentagon said it carried out a strike in late May against Abdullahi Haji Da'ud, one of al-Shabab's senior military planners, and served as a principal coordinator of attacks in Somalia, Kenya and Uganda.
The latest strikes took place Monday in Torotorow in southern Somalia's Lower Shabelle region.
"During a Somali-led counterterrorism operation, a large group of armed al-Shabab fighters attacked the force, threatening the safety and security of the forces in the area," said Captain Jennifer Dyrcz, a U.S. Africa Command spokeswoman. "In response, the U.S. conducted two self-defense strikes ... killing four al-Shabab militants."
Al-Shabab was pushed out of Mogadishu by African Union peacekeeping forces in 2011 but has remained a potent antagonist in Somalia, launching frequent attacks aimed at overthrowing the Western-backed government. For instance, the Islamist militant group claimed responsibility for an August 30 car bombing outside Mogadishu’s presidential palace that killed at least 22 people.
Posted by Siad barre at 6:59 AM No comments: