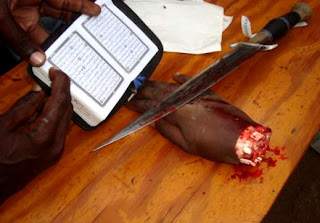 (TF.SF)  BELEDWEYN – The administration of Somalia's al-Qaeda-linked Islamist Terrorist. Al-shabab have sentenced two young men and amputated their hands in Beledweyn town in central Somalia on Saturday according to witnesses and residents.

Sources in Beledweyn town said that Al-Qaida  affiliates Al-shabab fighters had accused the two men for steeling activities and decided to cut off of the hands of the two boys and did in a square in the town of Hiran region
Both young men were about 23-18 and the administration of Al-shabab had said the two  suspect was allegedly involved in looting food from stores in Beledweyn town.  estimated value is likely to be.120 000 somali shilin  is a less than a  70 us  dollar, shabaab cut hand of both boys.Hundreds of people had come at the square where the hands of the young men were cut off for watching the amputated hands those were lastly hung at the centre of Al-shabab administration in Beledweyn town .There had been more people who lost their limbs in such sentences of Al-shabab in south and central Somalia. because most individuals in detention have no legal representation and face considerable challenges in developing their own legal arguments. the presiding judge Sheakh Mahamed  shabaab  implementing the barbaric Sharia Laws  to both young Victims  .. Al Shabaab forces amputated the right hand  Cutting Off Hands of  Harun abdi eilmi (21) and  Liban hussian hersi (18), in Beledweyn town somalia  Sharia ??