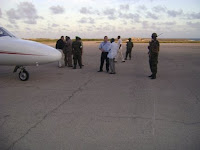 h security agent kidnapped by insurgents in Somalia last month was a free man Wednesday and under protection at the presidential palace, officials said.There were conflicting reports over whether the man escaped or was released and whether he had killed three of his captors. The fate of another French security agent kidnapped with him was not immediately clear.Farhan Asanyo, a Somali military officer, told The Associated Press that the man came up to government soldiers early yesterday, identified himself and said he had escaped after killing three of his captors.But the French Foreign Ministry said "his li 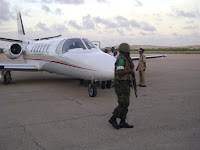 beration came about without violence, contrary to certain information provided locally." The ministry statement made no mention of an escape, 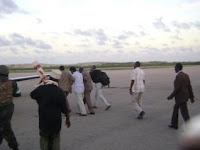 leaving open the possibility that there were negotiations to free him. The agent is safe at the palace and "in a good mood," said Abdul Qadi Hussain Wehliye, the assistant information secretary of Somalia's presidential palace. Wehliye said the agent had escaped his captors did not mention any killings.The two French agents were abducted in July from a hotel in Mogadishu, the capital of Somalia, then split up between the rebel groups Al Shabab and its ally Hizbul Islam.The French agents were in the country to train Somali government forces, which are fighting Islamist militiamen. Militants had said the two would be tried under Islamic law for alleged spying and conspiracy against Islam. Foreigners rarely travel to Somalia, which is among the most dangerous countries in the world. AP