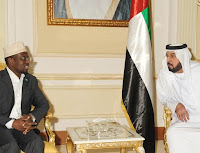 Abu Dhabi: President His Highness Shaikh Khalifa Bin Zayed Al Nahyan received at his Bateen Palace, Shaikh Sharif Ahmad Shaikh Mahmoud, Somalia's President in the presence of Shaikh Sultan Bin Zayed Al Nahyan, the President's Representative and General Shaikh Mohammad Bin Zayed Al Nahyan. The President welcomed the Somali Head of State and the accompanying delegation, who are on a visit to the UAE as part of a tour of the region.On Monday evening, Shaikh Khalifa received renowned Muslim scholars from various Arab and Islamic countries who had arrived earlier in the UAE at the invitation of Shaikh Khalifa to participate in this year's religious activities during the holy month of Ramadan. For their part, the scholars prayed to the Almighty Allah to shower His blessings on the UAE and other Arab and Muslim nations. They also expressed gratitude for Shaikh Khalifa's hospitality and hailed the UAE's humanitarian efforts. Welcoming the guests, Shaikh Khalifa underscored the role of Muslim scholars in propagation of Islam (Da'wah) and promoting tolerance and moderation that are among the great attributes of Islamic faith, culture and mission. .more..http://www.gulfnews.com/nation/Government/10345213.html
Posted by Siad barre at 5:57 PM