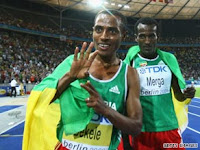 CNN) — Ethiopian legend Kenenisa Bekele secured his fourth successive men’s 10,000 meter world title with another gold medal winning performance at the World Athletics Championships in Berlin.Bekele equalled the record of compatriot Haile Gebrselassie, who also won four world titles at the distance, after sprinting away from Zersenay Tadese of Eritrea on the final lap.
Triple Olympic champion Bekele crossed the line in 26 minutes, 46.31 seconds with Tadese taking silver in 26:50.12 and Moses Dniema Masai of Kenya securing bronze in 26:57.39.
The 27-year-old Bekele added Berlin gold to his victories in Paris (2003), Helsinki (2005) and Osaka (2007) to continue his remarkable 100 per cent record in the event having won all his 12 races so far.Bekele, who is also the world record holder at both 5,000m and 10,000m will now attempt to win the 5,000m in Berlin and to add to the distance double he achieved at the Beijing Olympic Games last year.Jamaica continued their dominance in the sprints when Olympic champion Shelly-Ann Fraser followed in the shoes of compatriot Usain Bolt by following up her Beijing win by claiming the women’s 100 meters.Fraser led from the gun to pip compatriot Kerron Stewart in a time of 10.73 seconds. Stewart finished just two-hundreds of a second back in 10.75 with American Carmelita Jeter third in 10.90.Double Olympic and world champion champion, and world record holder, Yelena Isinbayeva lost her five-year stranglehold on the women’s pole vault — as she failed to register a height.The Russian had won all major titles since the 2004 Athens Olympic Games, but she has been out of form so far this season and failed to clear her final height of 4.80 meters.Poland’s Anna Rogowska cleared 4.75 meters to secure gold from American Chelsea Johnson, who vaulted a season’s best of 4.65m, for silver. Another Pole, Monika Pyrek, claimed the bronze.On a night of shocks, there was a futher one when Kenya’s Olympic women’s 800 meters champion Pamela Jelimo failed to reach the final after failing to finish in her semifinal.The 19-year-old — who dominated the event last year culminating in her stunning Beijing win — had complained of having a problem with her ankle after Sunday’s first round heat.The teenager was never going well on Monday and finally gave up the ghost down the back stretch of the second and final lap..more..http://www.cnn.com/2009/SPORT/08/17/athletics.worlds.100m.women/index.html?eref=rss_latest
Posted by Unknown at 11:45 PM