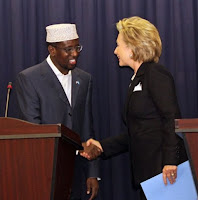 (CNN) -- Somali government forces have seized control of a central town from an al Qaeda-linked Islamist militia, a spokesman for Somalia's president said Thurs"Bulo Burde is now under the control of government forces after our forces overran a stiff resistance at the entrance bridge of the town by Al Shabaab fighters," said Abdulkadir Mohamed Osman, communication director for Sheikh Sharif Sheikh Ahmed, Somalia's transitional president.Despite the announcement, residents said heavy fighting continued Thursday and the town is still divided between pro-government forces and Al Shabaab fighters.The ongoing exchange of heavy-weapon fire between the two sides has trapped people in the town, residents said."Everyone inside this house is scared because heavy shells are raining in the town," said one resident, Sahra Muse.Bulo Burde is about 155 miles (250 kilometers) southeast of the Somali capital of Mogadishu.The United States is supporting the Somali government's fight against the insurgents, including providing weapons to government forces. Al Shabaab is on the U.S. list of terror organizations because of its ties to Osama bin Laden's al Qaeda network.
The United States is concerned that Somalia's weak government could fall to the Islamist insurgency, as it did in 2006 before Ethiopian forces ousted the militants from power later that year.day...more..http://edition.cnn.com/2009/WORLD/africa/08/20/somalia.town.captured/
Posted by Siad barre at 4:37 PM