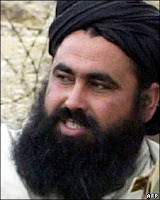 The leader of the Pakistani Taliban, Baitullah Mehsud, is dead, two of his senior commanders have told the BBC.

It is the first time that the militant group has acknowledged his death.The commanders, Hakimullah Mehsud and Waliur Rehman, said that he had died of injuries sustained in a US missile strike earlier this month.Hakimullah has been named as successor to Baitullah Mehsud, who was Pakistan's most feared militant, accused of scores of suicide bombings and other attacks.Hakimullah Mehsud, who is believed to be in his late 20s, said Baitullah Mehsud had been critically wounded by the missile strike but died only on Sunday.Waliur Rehman said that Hakimullah Meshud had his support as leader, and denied reports of differences between the two men."There are no differences between the various Taliban faction and we are all united."Earlier, government officials said the two factions led by Hakimullah Mehsud and Waliur Rehman had taken up arms against each other.more..http://news.bbc.co.uk/2/hi/south_asia/8220762.stm