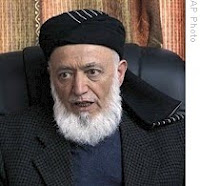 Former Afghan President Berhanuddin Rabbani survived an assassination attempt Thursday in the country's northern Kunduz province.Local officials said Taliban fighters attacked Mr. Rabbani's convoy with rocket-propelled grenades and gunfire. They said no one in the convoy was hurt, but that three attackers were killed in a battle with bodyguards and police.Mr. Rabbani is a supporter of Afghan presidential candidate Abdullah Abdullah, a main challenger to incumbent President Hamid Karzai in the August 20 presidential and provincial council elections. The Taliban claimed responsibility for the attack.Also Thursday, in the south, gunfire killed a U.S. soldier, and a roadside bomb claimed the lives of three British troops.In Archi district of Kunduz, Afghan police and insurgents clashed for a second day. Officials said eight insurgents and two policemen were killed. RFE/RL's Radio Free Afghanistan, known locally as Radio Azadi, has announced it will host the only debate featuring all three leading presidential candidates, including Mr. Karzai...MORE..http://www.voanews.com/english/2009-08-13-voa6.cfm
Posted by Siad barre at 3:55 PM