Africa Oil war has impacted communities in Galgala, Balanbal and places in the Ogaden

Ethiopian Army killed and injured civilians in Balanbal district, Central Somalia, an incident believed to have connections to gas and oil exploration pursued by Melez government in the Ogaden and extended to the border with Somalia. Similar incident took place in the town several months ago where the Ethiopian Army murdered and maimed more than dozen people including three prominent Marehan clan chiefs. The action of the Ethiopian government is deeply rooted in their quest to exploit region’s mineral and oil reserves. As of now, Africa Oil and Cinmax (small mafia operandi organizations) are conducting Seismic tests in the Ogaden and the surrounding regions. In Ogadenia, in 2006, the rebel group ONLF in an ambush, attacked Chinese staffers who where drilling gas wells in the region. Nine Chinese and many Ethiopians where killed in the attack. However, unreported, the illegal mineral and oil exploitation undertaken by small unpopular corporations under the pretext of economic development, cause civilians in those regions to suffer. In the Balanbal situation, Ethiopian Army is engaged active war in the reserve area (Somalia-Ethiopia border) with the border inhabitants to displace thousands of people in order to reach its goal which is: to steal natural resources of the people of Ogaden and neighboring, unprotected reserve area. 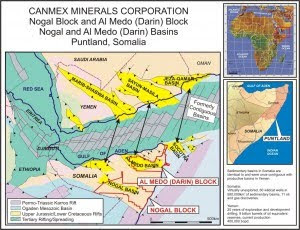 In the Africa Oil website, ongoing projects in the Ogaden and Puntland autonomous state are presented ready to view. The partners in the deal are the Melez administration in Ethiopia, Puntland Regional Government, African Oil and its subsidiaries. Often oil schemes involve cash handouts to the willing partners under the guise of operational costs. Masterminds like Africa Oil, market their schemes on their website openly, even go as far as demonstrating their strategy towards sharing operational costs with external companies just serving them promissory note to ascertain future revenue shares. It is a dangerous undertaking since the civilians in those regions are mere subjects who have no say whatsoever. For example, in Central Africa country of Congo, hundreds of thousands of civilians have been uprooted from their homelands under the curtain of development projects. Africa Oil and the like are out there to scavenge unprotected resources of smaller nations with no legitimate governments present.
Africa Oil other resource exploitation projects has also sparked intensive war between Puntland government and the defenders of the Sanaag Natural Resources. In that confrontation alone, 90 people have been reported killed and thousands wounded. Communities’ only food sources–farms and wells–have been set ablaze or poisoned. Africa oil in collaboration with President Abdirahman Farole of Puntland, has delivered its final verdict on these communities. President Farole ( Africa Oil Partner), first ordered people to leave their homes or face the impossible, then, a week later he gave the army ‘green light’ to invade Galgala some 60km from Bosaso. And though the military initially captured the town, operations have been seized temporarily after the Puntland Army lost many soldiers. No one knows what is to follow.


Te end, in the light of the recent displacements of viable communities in Central Africa and the ongoing onslaught in Galgala and Balanbal, the international community has the obligation to step in: 1) Provide protection to the civilians in the cross fire. 2) Ban the stolen resources and Africa Oil’s trade activities. Indeed, Africa Oil’s self incriminating reports indicate for the foreseeable future, they will continue hunting for unprotected resources, whilst depriving the people of their God given rights to the resources. If the world does not do anything and continuous to watch unprovoked, Nigeria’s Delta region like resistance–unstoppable–will pop up in many places of Africa and Asia.

©2010 All rights reserved. Users may download and print extracts of content from this article for their own personal and non-commercial use only. Rebublication or redistribution of this report, including by framing or simeans, is expressly prohibited without the prior written consent of Terror Free Somalia Foundation
terrorfreesomalia@gmail.com
Posted by Unknown at 4:29 PM