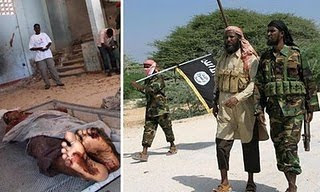 The incident compounded an already bad day, More Al Qaeda Terrorists work related accident.
update.. Foreign militants, including two Indians, killed preparing bombs in Somalia
Blasts, possibly linked to the premature explosion of a car bomb, destroyed a house in the Somali capital used by Al-Qaeda linked militants, witnesses said Saturday.Three explosions were heard late Friday in a house in southern Mogadishu's Barubah neighborhood, one of the main strongholds of the Islamist Shebab militants in the capital, and witnesses said heavily armed militants cordoned off the area, preventing people from reaching the scene."We don't know what caused the explosions but the house where it hit has totally collapsed and I saw one burned body found under the rubble", Adan Yusuf, a witness said.Another witness, who spoke on condition of anonymity, said everybody had heard the very loud explosions but dozens of Shebab militants had barred access so it was not possible to know how many casualties there were.The Al-Qaeda linked group could not be reached for comment but some nearby residents said militants had been planting a suicide car bomb when it went off prematurely."There was a car inside the building which exploded, I think they were preparing a suicide car bomb", Hasan Tuke, a witness said. In another incident, an insurgent fighter died last night after a roadside bomb he was planting near a street in southern Mogadishu exploded."This man died last night after his plans backfired, the roadside bomb he was planting exploded and killed him", Abdulahi Hasan Barise, Somali police spokesman said. AFP
Posted by Siad barre at 5:35 PM

This is really a heart touching tragedy. May this wont repeat this anyone.