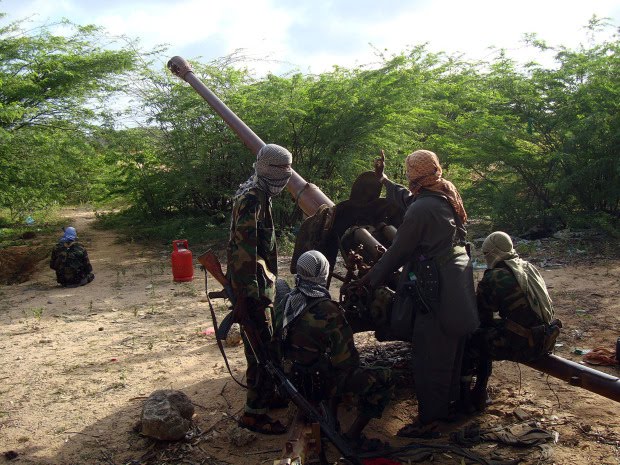 Just a few months ago, the going story on al-Shabab, an Islamic insurgent group in Somalia, was that it could carry out well-coordinated, very deadly attacks, but posed no existential threat to the country's central government, weak as it may be. Now, after a series of bombings on Tuesday that culminated with the brazen killing of at least 30 people, including six members of parliament, al-Shabab has shown itself to be far more powerful than that, and Somali state officials tell TIME they fear the Western-backed government could fall any time.  (See how al-Shabab emerged from the chaos of Somalia.) Tuesday's attack saw just two al-Shabab fighters storm the Muna Hotel in Mogadishu early in the morning, gunning down bystanders outside and hotel staff, armed guards and parliamentarians inside before blowing themselves up. The fact that they succeeded in killing so many people at a hotel frequented by security forces and politicians, many of them armed themselves, was a striking symbol of the government's impotence. "The government does not have enough power to defeat al-Shabab and to secure the safety of Mogadishu," Ali Osman, a senior official in the Ministry for Industry, tells TIME. "This is shameful for the TFG [Transitional Federal Government] and I cannot really say there is a government — it is just a name." (See a brief history of al-Shabab.) The Transitional Federal Government was formed in 2007 with the backing of the international community. It remains in power thanks mostly to 6,000 African Union peacekeepers who protect Villa Somalia, home to President Sheikh Sharif Ahmed, as well as the airport, the docks and a few city streets around them. Last week, the AU announced that the first of 2,000 additional troops had begun to arrive — part of plans to fulfill an earlier AU promise for 8,000 soldiers — but that didn't stop al-Shabab from launching a new offensive on Monday in which 40 people were reportedly killed. After the massacre at Muna Hotel on Tuesday, 10 more people were killed Wednesday in a third day of fighting. Al-Shabab leaders have vowed more attacks soon. "Al-Shabab will attack the enemies of Allah in our country and will continue until they are removed and Somalia comes under Islamic rule," al-Shabab spokesman Sheikh Ali Mohadum Rage told TIME. "There will be many other places that will be attacked both in the country and, if necessary, outside the country. Al-Shabab will not be stopped." Such words might once have been seen as empty threats, but no longer. Al-Shabab has gained strength with surprising speed since it emerged in 2006 from the ruins of a more moderate Islamic government that had brought some stability to Somalia until Ethiopia invaded late that year. The group now controls much of southern Somalia, including the lucrative port of Kismayo, and seeks to impose Taliban-style sharia law across the country. Last December, al-Shabab claimed responsibility for a suicide bombing at a medical-school graduation ceremony in Mogadishu, killing 24 people including three government ministers. Then, in July, bombers staged double attacks in Kampala, Uganda, on the night of the World Cup final that left 74 people dead. Uganda has supplied about half of the AU peacekeepers in Mogadishu. (See more on the attack in Uganda.) Analysts and members of the government attribute some of al-Shabab's bloody success to an influx of money and training from foreign fighters linked to al-Qaeda. On Wednesday, the Wall Street Journal reported that the U.S. now believes a branch of al-Qaeda in Yemen is working closely with al-Shabab. The trouble is figuring out the best way to respond. The U.S. and other allies of the Transitional Federal Government have often said that the TFG represents Somalia's best hope for peace, but are reluctant to send the sort of military or financial support that would allow it to turn the tide against al-Shabab. In July, the former U.N. representative for Somalia, Ahmedou Ould Abdallah, said the Somali government had only received $3.5 million of $213 million pledged at a donor conference in 2009. But whether there's much foreign governments could do, short of sending huge numbers of troops into Mogadishu, is up for debate. The TFG is riven by internal fighting, defections, corruption and financial bankruptcy. It holds a tiny piece of the Somali capital and, without the thousands of AU troops stationed in Mogadishu, would fall quickly. Somali officials — many of whom also receive their salaries from foreign governments — say that such a state of affairs cannot last, if only because al-Shabab will make good on its threats and oust the government from power. "We aren't getting the international support that we were promised," Mohammed Omar Talha, the deputy speaker of parliament, tells TIME. "If we do not attack them in their places, they will attack us in the presidential palace. So we cannot wait." That sentiment was echoed by another MP, Mohammed Abdi, who predicted the TFG would fall soon without help. "The situation is worse than before, let's not hide the truth," Abdi tells TIME. "If the AU and the international community don't come in the next few weeks to help us I don't think we'll have a government of Somalia.
See pictures of the twin bombings in Uganda's capital.
See pictures in "A Jihadist's Journey." By Nick Wadhams  Time
Posted by Unknown at 3:32 PM