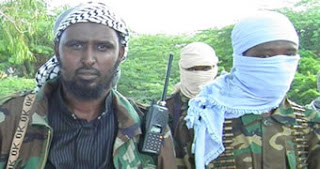 (CNN) -- An al Qaeda-linked militant movement has taken control of a radio station in Somalia's capital, the government announced Saturday.The weak central government claims the group is spreading propaganda from at least two radio stations, including Mogadishu's Holy Quran radio, a private FM station, which it took earlier this week.Al-Shabaab earlier this year looted private radio equipment to use in a station, the government said."We strongly condemn these acts. They want to silence the independent media with brutality and intolerance," said Abdirahman Omar Osman, Somalia's minister of information.
Al-Shabaab, which has pledged allegiance to al Qaeda, controls much of southern Somalia and portions of Mogadishu. It follows the strict Saudi Arabian-inspired Wahabi interpretation of Islam, rather than the Sufi Islam of many Somalis."Somalis in remote areas are not educated in the detail of Islam," the transitional government said in a statement. "They are vulnerable to radicalization and Al-Shabaab is intent on using radio as a means to impose their views and extreme interpretation of our faith and to brainwash the young men, women and children, especially in rural areas, where the number of educated people is limited."This is a serious issue as we see that the recent forced recruitment of young men and boys is occurring outside the capital Mogadishu."The National Union of Somali Journalists (NUSOJ) condemned the takeover of Holy Quran Radio as a "blatant crime."In a statement issued earlier this week, al-Shabaab said all radio equipment belonged to Somali Muslims and that listeners in the capital will enjoy religious programs and other coverage.
Posted by Unknown at 5:01 PM