Somali pleads guilty in case of pirate attack on US warship 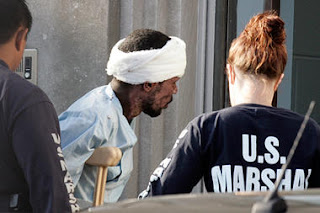 update on Friday, April 23, 2010 story ..Pirate Suspects From Somalia Charged in U.S.,11 Somalis appear in US court on piracy charges -

Jama Idle Ibrahim admitted in federal court Friday that he was one of several men who attempted on April 10 to commandeer what they believed was a merchant ship. It was actually a US warship, the USS Ashland. Ibrahim has agreed to testify against five other defendants.

One of six Somalis accused of attempting to take over a US warship in the Gulf of Aden has agreed to plead guilty and cooperate with federal prosecutors against the five remaining alleged pirates.Jama Idle Ibrahim admitted in federal court in Norfolk, Va., on Friday that he was one of several men in a skiff who attempted on April 10 to commandeer and hold for ransom what they believed was a merchant ship.They were mistaken. Instead of a defenseless commercial vessel, the would-be marauders pulled alongside and began firing AK-47 assault rifles at the USS Ashland, an American warship. The ship returned fire, killing a man in the skiff. The others were captured and transported to Norfolk to stand trial on piracy charges.Last week, the federal judge in the case, US District Judge Raymond Jackson, threw out the first count in the indictment – the piracy charge. He said the federal prosecutors’ definition of piracy was too broad and contrary to US Supreme Court case law. Despite the legal victory, the Somali defendants continue to face trial on a seven other federal charges of pirate-like acts and alleged use of illegal violence at sea. In his deal with federal prosecutors, Mr. Ibrahim agreed to plead guilty to three counts in the indictment. He also agreed not to contest a government request that he be sentenced to a 30-year prison term. Under the plea agreement, prosecutors said that if Ibrahim cooperates fully – including testifying against his former associates at trial – they will recommend a reduction of his prison sentence.The action came as federal prosecutors in Washington charged Ibrahim in a second case. The charges include conspiracy to commit piracy and conspiracy to use a firearm during a crime of violence. He is expected to plead guilty in that case, as well.The second case stems from a separate incident of alleged piracy in the Gulf of Aden involving the merchant ship M/V CEC Future.Prosecutors pointed up the historic nature of Ibrahim’s plea agreement. “Today marks the first conviction in Norfolk for acts of piracy in more than 150 years,” said US Attorney Neil MacBride, in a statement.
Ibrahim pleaded guilty to charges that he attacked a vessel with the intent to plunder it, that he engaged in an act of violence against persons on the vessel, and that he used a firearm in the attack.
Ibrahim’s sentencing is set for Nov. 29.
In a written admission, Ibrahim said that he and the five other men “were all willing participants in this planned piracy.”The statement says in part that they “set out to accomplish this piracy with a common purpose and each contributed to the goal of successfully pirating a merchant vessel by, among other things, operating a boat in which they sailed, operating weapons, or standing ready to participate in the boarding and seizure of a vessel.”  The Christian Science Monitor
Posted by Siad barre at 3:37 PM