'Merchant of death' could be set free 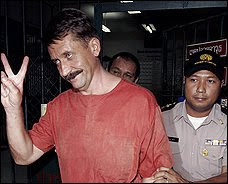 Viktor Bout has sat in a Thai jail for more than two years with a U.S. extradition request pending. By Friday we will know if a notorious international arms dealer will head home to Russia to once again ply his deadly trade or land in New York to face terrorism charges. Will his extradition be a diplomatic win for the Obama administration and solidify U.S.-Thai security cooperation? Or will his release allow him to again arm those gunning against U.S. interests? Disturbingly, it is looking like the latter. Out of the dust of the Cold War, Bout built a complex enterprise that spanned several continents and employed a network of nefarious individuals, front companies and aging Soviet aircraft fleet capable of dropping arms in even the most remote regions.
Dubbed the "merchant of death," Bout, 43, fueled many brutal civil wars in Africa and beyond through illicit arms sales. He dealt weapons to several sides fighting in the Democratic Republic of Congo in the 1990s. One U.N. report after another cited Bout for busting international arms embargoes. Former Liberian president Charles Taylor, now facing charges of war crimes, relied on Bout to arm his reign of terror in West Africa. Thousands of limbless victims are part of Bout's legacy.
In Afghanistan in the late 1990s, Bout simultaneously armed the Taliban and its rival, the Northern Alliance. His dealings with international terrorist organizations reportedly include Hezbollah and elements that went on to form al-Shabaab, the Somalia-based terrorist group that is an increasing concern of the FBI.
Bout believed he was negotiating a deal to provide the Revolutionary Armed Forces of Colombia (FARC) with millions of dollars in arms when he was arrested in March 2008 in a bold joint operation between the U.S. Drug Enforcement Agency and Thai authorities. This deal was to include 100 advanced Russian-designed shoulder-fired missiles capable of blowing aircraft out of the sky. With Bout, anything flies for the right price. And his assembled logistical capability could transport a nuclear weapon. Years of solid law enforcement cooperation with Thailand and its status as a major non-NATO ally suggested that extradition to the United States would be smooth. Unfortunately, the process has been anything but. Last August, a Thai court rejected the U.S. extradition request on the vague grounds that the FARC is not a terrorist group. A Thai appeals court has proceeded opaquely for the past year and is scheduled to issue its final ruling on the case Friday. Charges may very well be dropped.
Six months ago, sensing the need for a backup plan, the U.S. attorney for the Southern District of New York unsealed a second set of charges against Bout dealing with wire fraud and money-laundering. Thai authorities have not even responded to these charges. If the appeals court rules in Bout's favor this week, he is likely to become a free man.   more..
Posted by Unknown at 6:23 PM