Somali government says killed 25 Al-shabab fighters in recent clashes, TFG Security Forces working with AMISOM to contain Alshabaab offensive,The Somali Police department has displayed the dead body of a man in his early 30s whom they said that he is Al-Shabab member. 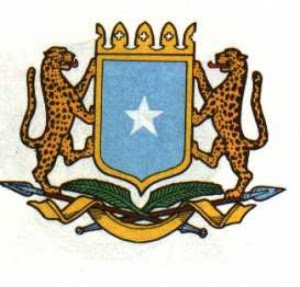 TFG Security Forces working with AMISOM to contain Alshabaab offensive
(TF.SF) Mogadishu-Somalia-August 26th, 2010) Anticipation and planning is enabling TFG security forces, supported by AMISOM forces, to contain the latest Alshabaab offensive against the Somali people, launched by the extremist group last Monday. In the last three days it is reliable estimates account for more than 25 Alshabaab militias dead, including Abdulahi Mortar, an extremist military and tactical leader who executed numerous mortar attacks on civilians in the city. Over 70 Alshabaab terrorists were wounded in yesterday's fighting alone. However, fighting has also resulted in the regrettable death of an estimated 70 innocent civilians, and the wounding of around 200 others. Hospital procedures are coping well. Wounded people are receiving treatment and some medevac is also taking place for the most seriously injured. The Minister of Information said: "All our preparations mean that Al Shabab are left with ever more desperate 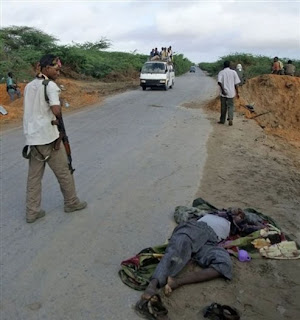 options.The city will remain on high alert. We know where they are targeting and we are doing everything we can, with outstanding support from AMISOM, to contain the threat. Without the necessary forces, Al Shabab may still get through to murder innocent people, so we need the citizens of the Mogadishu to remain vigilant. "Somali President Sh Shariif Sh Ahmed offered a ceasefire to allow decent citizens to celebrate the holy month of Ramadan in peace, but the defiant terrorists Alshabaab have failed to respect this offer and are wholly responsible for the fighting around the city. But escalating violence during Ramadan simply reinforces what we already knew. AlShabab are ruthless in their desire to terrorise the Somali people into submission. "Their reign of terror doesn't stop at suicide bombings. Beheadings, amputations, stonings, forced recruitment of children, banning of music and football, grave desecrations and the repression of the media are the hallmarks of Al Shabab. There is no popular support for them and so they turn to ever more desperate measures."
Ministry of Information, Mogadishu
Body of death shabaab Terrorist today fighting Afgia,Control Point  just east of the capital 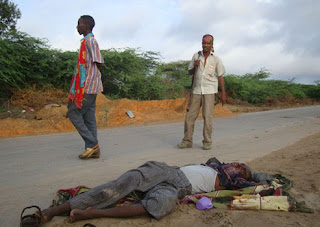 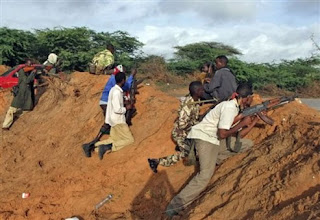 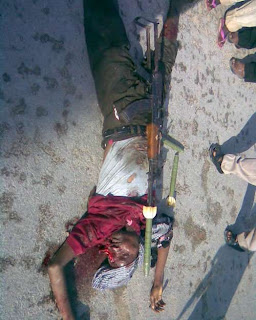 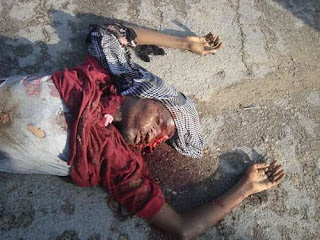 The Somali Police department has displayed the dead body of a man in his early 30s whom they said that he is Al-Shabab member. 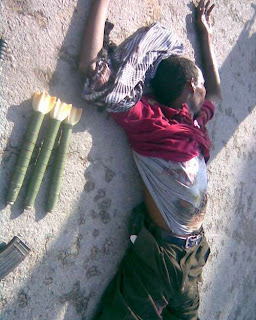 This man was killed by the Somali government soldiers overnight while he and other 4 colleagues of his have clandestinely attacked Somali a government soldiers base along the famous street of 21st October in Mogadishu.
The Police have added that they are tracking down the other 4 comrades of the unlucky man, and bring them to justice.

Police Lieutenant Hassan Dulan Hirsi who is the police commander of Afisiyoni police division has on Thursday morning addressed press and displayed the dead body the man who the Somali government soldiers have killed overnight.
“This dead ugly man here in front of you is very unlucky he was among 4 coward Al-Shabab men who have attacked a base of the Somali government soldiers along this street of 21st October, the Somali government remain alert all night, and have fought back the Al-shabab men and have succeeded in gunning down this fellow here, and have apprehended an AK47 assault riffle and some 4 bombs” said Lieutenant Hirsi. The Police lieutenant has also added that the police is pursuing those who have vanished during the fighting. Right at the scene where the dead body of the man was put on show was the spokesman of the Somali Police Colonel Abdullah Hassan Barise, the district commissioner of Hodan district, Mr. Abdi Mohamoud Warsame and a number of Police men keeping who were keeping the security of the area where the dignitaries were. On the other hand there is security operations which are underway at Waberi district which is were the event occurred overnight.
Posted by Siad barre at 4:35 PM