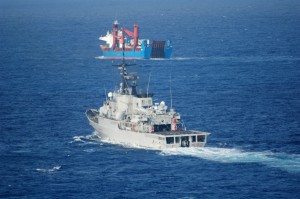 update..
Sweden hands over command of EU NAVFOR FHQ to France and Belgium
ITS LIBECCIO

On 29 July, ITS Libeccio and her crew joined Operation Atalanta and the Italian Frigate, under the Command of Cdr Antonio Galiuto, has begun patrolling in the Gulf of Aden Somali basin in support of escorts to the World Food Programme, AMISOM and the fight against piracy.

Initially, the Libeccio was tasked to patrol along the Somali coastline, gathering much needed knowledge on potential pirate activities along that coastline, with an eventual port call planned into Mombasa. ITS Libeccio was subsequently tasked to escort two vessels from the World Food Programme and AMISIOM, out of Mombasa to Mogadishu and Berbera (Somalia) respectively.
EU NAVFOR Somalia – Operation ATALANTA’s main tasks are to escort merchant vessels carrying humanitarian aid of the World Food Programme (WFP) and vessels of African Union Mission in Somalia, AMISOM and to protect vulnerable vessels in the Gulf of Aden and Indian Ocean and to deter and disrupt piracy. EU NAVFOR also monitors fishing activity off the coast of Somalia. European Union Naval Force Somalia
Posted by Unknown at 11:19 AM