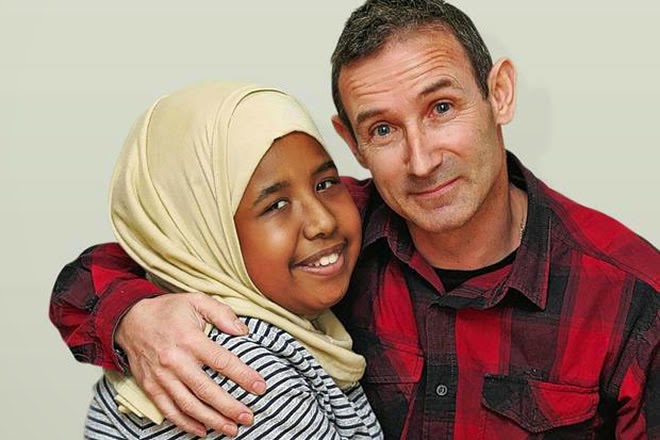 Recently the British Dailymail carried the amazing story of a British teacher, Ray Coe, 53, who donated a kidney to his young student, a Muslim girl, Alya Ahmed Ali, 13. The story was emailed to me by a friend who also said in his email: “What would Al Shabab say about this act?” he added: “Before Allah, isn’t it better to save a life than kill one.” My reply to him after reading the story was: “Al Shabab would probably demand the girl be killed as she now carries an infidel’s organ in her body.” This is not an exaggeration as one would not expect a better response from a group that makes it their duty to extinguish life and everything beautiful in it.
As heroic as it is, the noble action of the teacher to donate his organ to the girl is also what we should expect from every person with decent upbringing, who learned as a child what it meant to be good and kind to your fellow human beings. Mr Coe says while he was pondering the donation he remembered a verse from the Bible that says: “Maybe you were born for such a time as this”. And he said: “It clicked and I knew then that it was right.”
We know and every Muslim knows that the Quran is full of similar beautiful verses that command its adherents to be kind and charitable. One of these verses says: “Whoever kills a soul unless for a soul … it is as if he had slain mankind entirely. And whoever saves one, it is as if he had saved mankind entirely,” Al Mai’da, 32.  But the text is just a text as wise words can either be put to good use or construed in a distorted way by its followers. So while in the case of Mr Coe the line from the Bible brings the best out of him, it is unfortunate that the Quran has itself become a severely abused victim in the hands of its own people.
This British teacher saves this Muslim girl’s life not because he wanted to make a statement, not because he wanted to settle scores with anyone, not because he wanted to show that his religion is better than others, not because he wanted to convert the girl and change her religion, not because he thumped the Bible in the night and woke up in the morning with a vision to change the world, and not because he wanted to create a media stunt and grab  headlines; but on the contrary this kind teacher, a special educational needs coordinator,  thought only of what he could do as a human being to help alleviate the plight of little Alya and her parents, and he did the right thing. And as the school head teacher said: “Mr Coe has gone above and beyond the call of duty with this selfless and noble act.”
His only comfort was to see Alya’s reaction after he told her that he is going to be her organ donor: “When we told Alya, she just gave me a big squeeze and her face lit up. It brings tears to my eyes whenever I think of that,” he said.  However, in stark contradiction to the teachings of the Quran, Al Shabab followers wake up every morning with a plan on how many lives they can take, not how many lives they would save; they read Quran in the night and in their demented minds they come up with wrong self-serving interpretations. For them the Quran is not a holy book aimed at the betterment of life but a manifesto for war. While the British teacher made this great sacrifice to give life to a young girl, breaking all walls of division such as background, religion, and skin color,
Al Shabab and other extremist groups in the Muslim world every day slaughter their own country’s children, women and the elderly in schools, mosques, and restaurants. And while the smile of Alya brought tears to Mr Coe’s eyes, the grief of mothers and children who lostt heir loved ones in Al Shabab’s attacks does not bring tears to Al Shabab’s eyes but instead they shamelessly shout Allahu Akbar and invoke Quranic verses.
Given the choice to either go with Al Shabab of Somalia and other extremist killers in Syria, Afghanistan, Pakistan, Nigeria, Egypt and elsewhere to wherever they go afterlife or to go with Ray Coe, it is clear who I would choose for company. And this is exactly in keeping with the true meaning of the Quran.
Posted by Siad barre at 7:54 AM