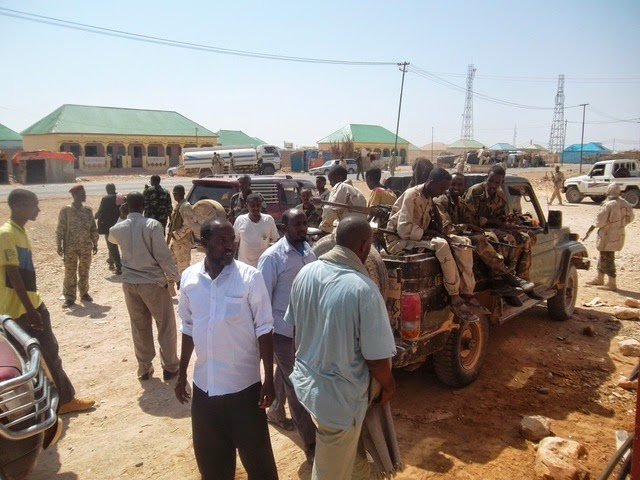 The defected Soldiers were welcomed in Armo district of Bari region

Authorities in Somalia’ssemi-autonomous region of Puntland say that dozens of troops loyal to the self-declared Secessionist  state of Somaliland have surrendered to them.
The mayor of Armo district of Bari region, Ibrahim Shire – where the troops had arrived- told the media that at least 60 men have surrendered themselves and their weapons from the breakaway region.
He did not say what the authorities were planning to do about them.
The troops have been reported to be based in Sanaag region, one of the disputed provinces between Puntland and  Separatist Administration aka Somaliland.
‘’ We were heavily armed in order to kill our people and we couldn’t accept o do such things, we decided to reunite with our people,’’ said one of the Soldiers who surrendered.
Their surrender comes as military tensions between both sides increased in the last weeks, after Somaliland deployed its troops to Sool- one of also the disputed regions- and captured Taleh district, but they withdrew after facing protests from the local residents.
Puntland Government warned  Separatist Administration aka Somaliland over its provocation and said that it will take the ‘‘necessary actions’’.
Last month, President Silanyo paid a surprise visit to the port town of Lasqoray , which lies on the Red sea and under goes Sanag region. His visit was coincided with the assassination of Puntland commander of forces in Galgala mountains late Col Jama Said Warsame, who was killed in a highway ambush.
Al-Shabaab claimed the responsibility of the assassination.
Puntland leader Abdiweli Gaas accused Somaliland of financing and training the al-Shabab militants hiding in Galgala mountain ranges and said that they got ‘’evidences’’ proving the link and will pass it to the International Community.
But Somaliland denied the allegations.
Troops from both entities have clashed over disputed borderlands in the past.
Posted by Siad barre at 6:11 PM